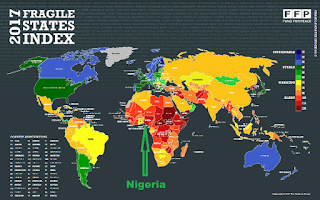 It is a long march from poverty to prosperity, but according to Olu Fasan’s assessment, Nigeria has not quite made the transition yet.


Last year, I took an online course titled “From Poverty to Prosperity: Understanding Economic Development”, taught by the famous Oxford University don, Professor Sir Paul Collier. Despite having a master’s with Distinction in Political Economy, I was curious about the fresh ideas, insights and evidence that Professor Collier, an authority on the economic development of African states, might share on the subject. It was a fascinating course, consisting of six modules, all centring around how a society that starts off as poor can ascend the path of prosperity.

Professor Collier’s starting point was that all nations were once poor, chaotic or anarchic, including Britain, which got “pretty close to a tabula rasa of anarchy” after it broke away from the Roman Empire in AD 410. His second point was that it’s a “long march” from poverty to prosperity. But, then, his third was that “some societies have successfully managed that long march, while others are still stuck in extreme poverty”.

Throughout history, Professor Collier explained, poor states have ascended the path of prosperity by taking five steps. First, they have a monopoly of power within their jurisdiction by creating a professional and effective army. Second, they build an efficient tax system to raise revenue. Third, they entrench the rule of law, including contract enforcement, to facilitate trade and business transactions, which help to grow the economy and bring in more tax revenue. Fourth, to enable even more trade, they invest in rudimentary infrastructure, such as roads, and create efficient markets to address coordination problems. Fifth, they have a power-sharing and decentralised democracy that engenders harmony and inclusive governance.

''Legitimacy is not just about winning elections, it’s also about the social contract''

But underpinning the above, a state that wants to escape poverty also needs four indispensable elements. First, it needs rules that set out the terms of governance and the parameters of behaviours. But rules are the easiest thing to do; they can be created with a stroke of the pen. Next, it must build institutions. These refer to “teams of people with a clear mandate” and the right values and motivation to make the rules work. Here, Professor Collier argued, it’s important to synthesise ideas from both political economy and social psychology. While political economists think of institutions as rules and structures that constrain behaviour, social psychologists think of them in terms of the values and norms of the people. But rules and institutions will only work if underpinned by the right norms and values!

The third element is a critical mass of well-informed citizens. As Professor Collier put it, “without a critical mass of support and pressure from citizens, rules and institutions become paper tigers, the rules get ignored, the institutions get overpowered”. Finally, there is “the authorising environment”, that is, leadership that brings all of this together. Historically, it took inspirational and effective leaders, such as Lee Kuan Yew in Singapore and Obafemi Awolowo in Western Nigeria, to develop and deploy rules and institutions and mobilise an informed citizenry to transform their societies.

Now, looking at Nigeria through the prism of the taxonomy of basic development conditions, I inevitably concluded that it failed virtually all the conditions for development; that it hasn’t ascended the path of prosperity because it has failed to do the needful. Nigeria is one of those countries Professor Collier said have failed to manage “the long march” and “are still stuck in extreme poverty”.

But as I reflected on these issues, a major international report put Nigeria’s challenges into sharp focus. The report, titled “Escaping the fragility trap”, was published in April this year by the joint LSE and Oxford University Commission on State Fragility, chaired by former British Prime Minister David Cameron and co-chaired by the former president of the African Development Bank, Donald Kaberuka, with Professor Collier and Professor Sir Tim Besley of the LSE as academic directors.

The report does not identify any country as a fragile state, but anyone looking objectively at the above symptoms vis-à-vis Nigeria would conclude that the country fits the bill. To support that proposition, let’s briefly consider each of the symptoms.

Take the first: insecurity. With the spread and impunity of Boko Haram, the marauding Fulani herdsmen and other militant groups, is there any doubt that Nigeria faces multiple threats from organised non-state violence? According to the report “Lack of security lies at the heart of fragility”. It continues: “Fragile states are ill-equipped to respond effectively to security threats. Citizens are therefore exposed to personal risks from violence”. Doesn’t that describe Nigeria? Of course, it does. Unfortunately, Nigerian security forces are not only unable to face down organised private violence in the country, they themselves have become predatory on the people, as frequent reports of human rights abuses by the military have shown. This is a strong indicator of state fragility.

How about state legitimacy? Legitimacy is not just about winning elections, it’s also about the social contract. If a government doesn’t meet the needs of the people, it would lack legitimacy in their eyes. Nigeria is a country where successive governments have failed to tackle unemployment, poverty, inequality and insecurity, while public officers abuse the state for personal gain. This undermines state legitimacy.

Which leads to the third symptom: state capacity. State fragility is also manifested in the failure of the state to deliver basic services to citizens. And, of course, Nigeria lacks the ability to get things done, to provide basic things that are taken for granted in many other states! Nigeria probably has one of the worst public sectors in Africa, with poor quality of policy delivery and public investment management.

What about the fourth symptom: unattractive environment for private investment? Well, Nigeria is one of the worst places to do business in the world, with bureaucratic hurdles, poor infrastructure, excessive regulations and a poor rule of law environment, including weak contract and property rights enforcement. As the report states, “insecure property rights are both a symptom of fragility and a contributor to it”. In Nigeria, there is little protection or guarantee of property rights.

The fifth symptom is also applicable to Nigeria, its economy is exposed to shocks. A section in former finance minister Dr Ngozi Okonjo-Iweala’s book, Reforming the Unreformable, is instructively titled “Nigeria – one of the world’s most volatile economies”. As a mono-economy that depends on oil for 96 per cent of its export and more than 75 per cent of government revenue, Nigeria is certainly prone to shocks, with little resilience – an indicator of fragility.

Finally, the sixth symptom: deep divisions in the society. Does that need further elucidation? Nigeria is socially and politically divided, deeply polarised along ethnic and religious lines, acutely lacking unity and cohesion. Nothing can make a state more fragile.

Of course, Nigeria is not a war-torn failed state like Libya, Syria or Afghanistan, and it’s not as fragile as some small, vulnerable states. Yet, Nigeria is not working as an effective state; it has all the recognised characteristics of fragility: lack of basic security, inadequate government capacity, a hostile environment for private sector growth, a divided society etc.

But Nigeria can escape the poverty and fragility traps. As Professor Collier espoused on his course, and the LSE-Oxford State Fragility Commission set out in its report, the solutions to state fragility are largely domestic. Nigeria must build strong and effective institutions of governance, develop the right societal norms and values, create a business and market friendly environment, have leaders with the vision and competence to transform the nation, and create an enduring political settlement, including decentralised governance structures, to engender harmony and cohesion. Nigeria needs the great leap forward, the great transformation, to escape the poverty and fragility traps. That won’t happen by merely tinkering at the edges of what’s a fundamental, even existential, problem!

Dr Olu Fasan, a lawyer and political economist, is a Visiting Fellow at the International Relations Department at the LSE.