35 States In Nigeria Will Experience Flooding in 2018 – NIHSA 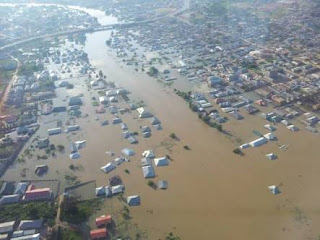 The Nigeria Hydrological Services Agency on Thursday announced that 380 Local Government Areas in 35 states would experience flooding in 2018.


According to NIHSA, flooding will be high in about 78 LGAs, although the situation will generally not be as severe as what the country experienced in 2012.

Commenting on the agency’s findings as captured in the 2018 Annual Flood Outlook, which was unveiled by the Minister of Water Resources, Suleiman Adamu, in Abuja, the Acting Director-General, NIHSA, Olayinka Ogunwale, stated that the government had been issuing warnings to residents in flood-prone areas to relocate from such locations.

He said, “Out of the 35 states that will be affected, 380 will be involved. The highly probable ones are 78 in number and they are spread all over the country. But the severity of flooding in 2018 will not be as bad as what we had last year and, of course, it cannot be compared to what we had in 2012.

“However, It is important to let those in flood-prone areas to know that the country will still experience flooding in 2018 and people in such locations should evacuate. This is one of the reasons for the AFO and the warnings from our agency and, of course, the government.”

In his address before unveiling the 2018 AFO, Adamu said the government was putting in place measures to manage high water flows from rivers and to contain flooding across the country.

According to him, some of the measures being put in place include the construction of the Kashimbilla Dam, which was designed to contain any eventual break of Lake Nyos, the establishment of reservoirs, artificial lakes and buffers, barriers, irrigation facilities and other structural controls.

On how to contain flooding in cities, Adamu noted that the government had adopted measures such as flood mapping, flood vulnerability studies and flood sensitisation and awareness campaigns.

The minister said his ministry was also working with upstream countries in West Africa for the management of transboundary rivers Niger and Benue.

“Nigeria is also working with the Niger Basin Authority, the Lake Chad Basin Commission, Nigeria-Cameroon joint Commission and the Nigeria-Benin Joint Commission to facilitate the pursuance of shared visions and effective management of water resources,” he added.

https://www.punchng.com/35-states-to-experience-flooding-this-year-nihsa/amp/
Posted by Don Okereke at 7:17:00 am