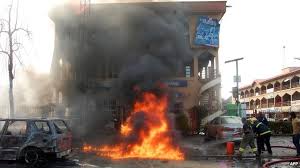 The Red Cross Society of Nigeria Wednesday confirmed 35 persons dead and 105 injured in the double bomb blasts which occurred in Gombe that night.


This is coming barely a week after the popular Gombe central market was rocked by a twin bomb blast, killing over 50 people and injuring several others.
The Secretary of the Society in Gombe, Abubakar Yakubu,  spoke at the Federal Teaching Hospital (FTH) Gombe where some of the victims are currently receiving treatment.

The Police Public Relations officer, DSP Fwaje Atajiri confirmed that the first blast occurred at Dadin Kowa Motor Park at about 7:50p.m. and another one followed about an hour later at Dukku Motor Park.
He said both areas were immediately cordoned off to prevent looting of shops by hoodlums while restriction of movement equally imposed to enable the police provide more security of lives and property.

An eyewitness at the Dadin-Kowa Motor Park told THISDAY that  the blast occurred in between the park and a nearby mosque while people were coming out of the mosque after observing their prayer at about 7:30p.m.

The latest has brought the number of those who have lost their lives 80 and about 180 injured in Gombe in less than a week as a result of Boko Haram’s attacks.
Meanwhile, based on the directive by the Chief of Army Staff, Major General Tukur Yusufu Buratai, to troops in the 3 and 7 Divisions of the Nigerian Army on the need to be more proactive in the fight against terrorism and insurgency, in compliance with the directive, additional roads have been cleared by troops for use by commuters.

A statement by the Acting Director Army Public Relation, Colonel Sani Kukasheka Usman, said the road linking Biu–Sabon Gari-Damboa in Borno State is now cleared of mines and insurgents for public usage.
The statement added that the public is encouraged to use the road as adequate security measures have been put in place for their safety.

Similarly, it said efforts are on for the clearance and reopening of other roads in Borno and Yobe States.