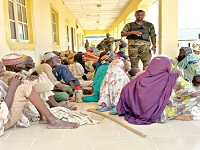 
There were however no arrests, but the soldiers recovered a Land Rover and tipper truck allegedly used by the insurgents. Presenting the rescued villagers yesterday at the Maiduguri military garrison, the spokesman of 7 Division of Nigerian Army, Col. Tukur Gusau said, “The military yesterday (Wednesday) in an offensive operation against terrorists in Konduga local council of Borno State, succeeded in killing many of them, while others fled with gunshot wounds.

We also recovered a Land Rover and a tipper truck used by the terrorists in two camps. “The rescued villagers were rescued by troops in Kashimri and Amarmari villages, used as terrorists’ camps in detaining these people, including 25 children and elderly persons.”

He said out of the 59 rescued villagers, there are 29 women, 25 children and five elderly persons, who would be taken to one of the resettlement camps in Maiduguri.