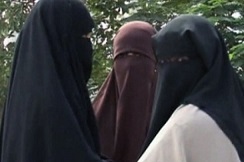 Cameroon has banned burqas in the Far North region after two women dressed in the religious garments blew themselves up last week in a suspected Boko Haram attack, a local governor said on Wednesday.


The twin attacks in Cameroon’s northern town of Fotokol killed at least 13 people, the government said.
“I took this measure because of the security situation prevailing in the region,” said Midjiyawa Bakari, governor of the Far North region.

Suicide bombings occur almost daily in Boko Haram’s base in northeastern Nigeria, but until recently they have been rare in neighbouring countries.

Recent strikes against Chad and Cameroon are seen as Boko Haram’s revenge on a regional military force both countries are part of. The Nigeria-led forces have pushed the Islamists out of most of the territory they controlled last year, but the dispersed militants have since resorted to guerrilla tactics.

In Chad, twin suicide attacks rocked the capital of N’Djamena in June, prompting the government to outlaw burqas in a bid to stop bombers concealing explosives beneath them.

That did not stop a man disguised in a woman’s burqa from blowing himself up in a crowded market in N’Djamena last week, killing 15 people.

Cameroonian officials have also banned motorbikes at night and tinted windows in vehicles. The measures do not apply to the Central African country’s other nine regions