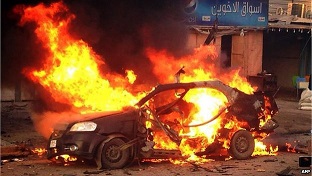 The reign of terror by suspected members of the Boko Haram sect continued Tuesday with a deadly bomb blast killing at least 20 people in the Sabon  Gari area of Zaria town, Kaduna state.

The governor of the state, Nasir El-Rufai, confirmed the casualty figure via his Twitter handle.
The attack came hours after a suicide bomb attack at a Mosque in Kano on Monday.
Similar explosions killed 44 people in Jos, Plateau State, on Sunday, the same day six persons were killed at a church in Potiskum, Yobe State, by a suicide bomber.
A resident of Zaria, Umar Mohammed, told PREMIUM TIMES Tuesday’s blast occurred at the local government secretariat where civil servants’ screening was taking place.
He said it was unclear who the bomber was, but said the attacker detonated explosives in the middle of the crowd.
“I have seen more than 10 bodies on the ground,” Mr. Mohammed told PREMIUM TIMES.