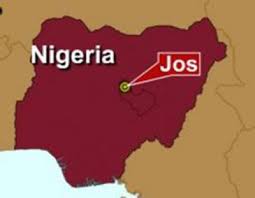 Two bomb attacks on the central Nigerian city of Jos have left at least 44 people dead, the authorities say.

A restaurant and a mosque were targeted on Sunday night.


No-one has claimed responsibility but militant group Boko Haram has attacked Jos before, even though it is not in north-east Nigeria where the Islamists normally operate.
The blasts are the latest in the series of deadly attacks in recent days which have seen more than 200 people killed.

From the 44 dead, 23 were killed at the restaurant and 21 at the mosque, Nigeria's National Emergency Management Agency (Nema) says.
There are also 47 people being treated for injuries, but emergency officials are still gathering information, so the figures may rise.
The blast at the restaurant was the result of a bomb that had been planted, whereas the mosque was attacked by a suicide bomber and that explosion was preceded by a gun attack, the BBC's Ishaq Khalid reports.

Our correspondent says that many believe that the mosque's imam, who was preaching at the time, may have been the target.

Sheikh Muhammad Sani Yahya Jingir has been preaching against Boko Haram since 2010 and has in the past survived an assassination attempt at his home.
He also survived this attack.

Jos has seen several attacks blamed on Boko Haram, including an incident in February when at least 15 died and in December last year when more than 30 people died.

Image credit: mnonline.org
Posted by Don Okereke at 9:44:00 am