How Untaxed Cigarettes Can Lead To Funding Terrorism 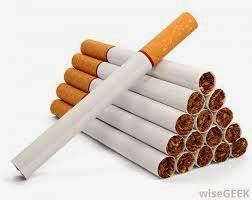 I’d like you to introduce you to Theophilus Burroughs. You’ve actually met him already. He’s the former Stuyvesant High School music teacher who allegedly decided a few years ago that he wanted to be one of those lone-wolf terrorist types.


There’s no indication that he was going to do the dirty work himself, but he did start dealing in contraband — first selling untaxed cigarettes and then graduating to heavy-duty weapons like AK-47s and even grenades.
The money he earned, it is alleged, was to be earmarked for Hamas, the Palestinian terror organization that Burroughs said he preferred because it was more willing to fight than others.
Burroughs, who is now around 53, got pinched along with others in a 2013 sting operation run by the state’s Department of Taxation and Finance, probably the last such aggressive bust done by the Albany outfit.
The would-be terrorist pee’d his pants when the cops nabbed him.
I mention this only because those of us who were following this case even before the details became public were thoroughly amused by Burroughs’ inability to control his bladder even as he was trying to exercise some control over what was going on in the Middle East. (The mop-up operation, I’m told, required janitorial-like expertise.)
I’m bringing Burroughs up again today for a couple of reasons.
First, he was in Bronx Supreme Court recently and is set to return on June 5 so that a trial date can be set. Burroughs, who is not free on bail, is on his fourth lawyer, I’m told. He botched an agreed-upon plea deal in 2013 when he started filing legal briefs on his own.
The deal Burroughs originally agreed to would have put him behind bars for 10 years for the criminal sale of a firearm, money laundering, tax fraud and other charges. He’s facing up to 25 years in prison if he’s convicted of everything — which could happen because Burroughs inadvertently posed for hidden cameras during the sting.
There’s another reason I’m mentioning Burroughs today.
The money he planned to send to terrorists was going to come from illegal cigarette sales. This scam is simple: He would drive from New York to Pennsylvania or wherever cigarettes taxes cost less — and returns with a trunk-load of the smokes to sell to otherwise law-abiding New Yorkers. Burroughs would then ship the dough overseas (or keep it for himself, depending on his frame of mind).
Often it was a combination of both.
In a very long article, the Village Voice recently pooh-poohed the notion that illegal cigarette sales were fueling terrorism. Well, that paper should meet Burroughs.
Let me get a little preachy for a minute because that’s the mood I’m in: If you buy cigarettes for a price that is obviously too good to be true, and if you buy knockoff pocketbooks on Canal Street or other faux luxury items around the city, your money could be going to terrorists.
Think about it. If that money is used for domestic terrorism, the next person who wets his pants may be you or me.
On May 4, the House Oversight Committee — which is investigating the Census Bureau — started asking people about their experiences when they file Freedom of Information Act requests with the Obama administration
Well, my experience has been terrible, especially when it comes to Census.


The folks appointed by President Obama just don’t want to give up documents even when they are legally required by law. I’ve tried to enlist readers in this battle to get Census to change its mind — but so far, it hasn’t budged.
So, let’s try this again.
The head of Census is John Thompson. His direct line is (301) 763-2135. Call him and tell him to turn over to The Post the documents I requested — which he is legally obliged to.
Last week, I told you about how Census had spent money hiring controversial comedian Dick Gregory to enlighten its workers. Let’s see what else Census is doing with our money.
We determined last week that Labor Department Secretary Thomas Perez is a clown because he laughs when people like me point out questionable data coming from his organization. So, for Clowny’s sake, let’s look into this some more.
My readers already know how Labor uses guesstimates to goose employment totals higher almost every month of the year — based on jobs it believes, but can’t prove, were created.
And Labor thinks this happens no matter what the economy is doing — like in April, when the economy was doing not much better that the miserable performance it notched in the first quarter.
No matter — Labor added 223,000 seasonally adjusted phantom jobs in April. So I asked Labor how many “real” phantom jobs it took to create the 223,000 seasonally adjusted phantom jobs.
They said they can’t tell me because that isn’t one of the things they calculate. Really!? So the government added this very generous guess to its totals and nobody — in all of Labor — can figure out this one little thing.
And Perez laughs when people bring up questions like this. What a dolt! I say Labor’s reports are wrong. And they are misleading policy makers who are trying to get the economy going again.

Image credit: wisegeek.com
Posted by Don Okereke at 8:59:00 am