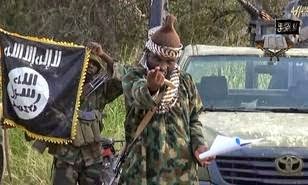 As the military deploys its special force units to track the fleeing leader of the Boko Haram sect, Abubakar Shekau, there are strong indications that the terror kingpin may have fled Nigeria through the help of Islamic State (ISIS) groups operating in East and North Africa.


Saturday Sun gathered that with the recent loss of his group’s caliphate headquarters, Gwoza to the Nigerian troops and the invasion of Sambisa forest by a detachment of the nation's special force units deployed from their base in Makurdi, Benue State, the Boko Harm leader saw his capture as imminent.
According to dependable military intelligence sources, Shekau had to send emissaries to ISIS affiliates with strongholds in East and North Africa to pave the way for his escape to their region from where he intends to coordinate his group’s activities or ultimately relocate to ISIS headquarters in the Middle East.

One of the sources revealed that “having discovered that he was being tracked through his Thuraya satellite phone, Shekau recently dropped the line and handset totally to evade capture. But the last satellite image of him and other intelligence pieced together by forces on the battle frontline show his desperation to escape from the country to parts of East Africa or North Africa where ISIS is having some footholds.”

The source, a red neck military chief further told Saturday Sun that “as part of moves being made by Shekau, he now relocates with fewer guards and limited number of lieutenants knowing his movement schedule. This is to frustrate intelligence gathering efforts by security forces and avoid attracting the focus of satellite image capturing technology deployed by some foreign super powers and shared with the Nigerian security forces.”

It was gathered that as part of his bid to escape the heat of ongoing military operations in the Northeast Nigeria, Shekau has in the last few weeks changed his look and physical appearance dramatically. “A recent intelligence from one of our foreign partners shows the Boko Haram leader clean shaven which totally alters his look. That heightens our curiosity about his motive, before we got other evidence that pointed to the fact that he was trying to cross the border”, the source added.

The militant group had on March 7 pledged allegiance to the leadership of ISIS in Iraq and Syria. The pledge, which was made by Shekau, who addressed himself as the Imam of Ja­maátu Ahlus Sunnah Lidda’awati Wal Jihad (Boko Haram) and was addressed to Abu Bakr al-Baghdadi al-Husseini al-Qurashi, the leader of the Islamic State of Iraq and the Levant (ISIL) or Islamic State of Iraq and Syria (ISIS).

“We are sending you this message, following what Allah said in his Quran (And hold fast, all of you together, to the Rope of Allah and be not divided among yourselves) and what the Prophet, Peace be upon him said (Whoever died and he had not Imam, died by death of ignorance).

“In submission to the order of Allah “Azza wa Jal”, and submission to the order of the prophet, peace be upon him to not separate from each other and to stay united as Ummah as Jammaaáh, We announce our allegiance to the Caliph of the Muslims Ibrahim ibn Awad ibn Ibrahim al-Husseini al-Qurashi and will hear and obey in times of difficulty and prosperity, in hardship and ease, and to endure being discriminated against and not to dispute about rule with those in power, except in case of evident infidelity,” read an English language translation of the video broadcast in Arabic.

ISIS has a few foreign groups from which it has accepted pledges, including Ansar Bayt al-Maqdisi in the Egyptian Sinai and groups of fighters in strategic areas of Libya. ISIS has a shura council that dictates the group’s strategic direction but takes a devolved, hands-off approach on tactical matters.

A week after the pledge of allegiance by Boko Haram, ISIS leadership in a statement accepted the militant group into its fold, with a promise to work with it to establish an ISIS cell in West Africa. In an audio message, a man who claimed to be the spokesperson for the Islamic State in Iraq and Syria, ISIS, said the group’s aim of establishing a caliphate has now been expanded to West Africa.

As earlier exclusively by Saturday Sun, Shekau had stayed in crisis-ridden Northern Mali to coordinate the training and operations of the militant group before they were flushed out of there by a joint French and African forces, including Nigerian troops. He thereafter crossed the porous borders to join his foot soldiers in Borno State.
“He may not find it easy to return to Mali this time round but we suspect he may be targeting East Africa or parts of North Africa such as Libya and Egypt where some islamist groups are causing instability now”, a senior military chief involved in the prosecution of the war against the militant group told Saturday Sun, adding that he cannot categorically say whether Shekau had indeed escaped or still in the country.

“On whether he has successfully escaped from Nigeria, I have no such information but at the same time I cannot rule that out because of his level of desperation to flee and his links with some other groups within the region and even beyond”, the source stressed, adding: “What we strongly believe at this moment is that he is still within our reach or that of our neighbours; especially Niger and Chad. He may find it difficult to move beyond these borders and may end up returning to one of our remote villages in the North-East to hide.”

The source also stated that Shekau had told some of his close lieutenants that he would rather die from gunshot from his guards than being killed by the Nigerian troops whom he regards as “infidels.”

“One of his captured commanders once disclosed that Shekau had given instructions to his personal guards to shoot him dead in the face of a confrontation with our troops who he calls infidels. He believes that makes him a martyr”, the source added.

When contacted on the information that Shekau had fled the country between the last week of March and the first two weeks of April, the acting Director of Public Rela­tions, Nigeria Army, Colonel Sani Usman said, “We have an ongoing war against ter­rorists in this country and we are determined by all means and what it takes to eliminate, capture all terrorists and destroy all their known camps.

“If in the process, any of their leaders is captured, so be it because the whole war is not about an individual. We are also determined to arrest all of them dead or alive.”