The National Emergency Management Agency (NEMA) has said that displaced women have been delivered of five babies at the Internally Displaced Persons (IDPs) camp at Kalambaina, Sokoto, between May 7 and 9.

The NEMA assistant head, Sokoto Zonal Operations Office, Thickman Tanimu, made this known to newsmen in Sokoto, saying amongst the five new babies, three were girls, while two were boys.

He said two were delivered on May 7 while on transit to Sokoto, two on May 8 and one on May 9, adding the mothers and children were hale and hearty.

The official said 2,000 displaced persons, including the new babies, were evacuated by the agency from Geidam in Yobe on Wednesday to Sokoto.

He said nearly 80 per cent of the affected people were from Kebbi, while the rest were from Sokoto State.

“They were earlier displaced due to insurgent activities in Doron-Baga in Borno and they fled to Gegeme in Difa state, Niger Republic as refugees.

“However, they were also unfortunately deported back to Geidam in Yobe State after an insurgent attack at their IDPs camp in Niger Republic.

“It was from Geidam that the IDPs were screened by NEMA and security agencies, and the agency evacuated them to Sokoto,’’ Tanimu said.

He said that the affected persons from Sokoto State had almost been evacuated by the state government to their various towns and villages across the 23 local governments of the state.

The United Nations Population Fund (UNFPA) has said that hundreds of girls and women recently rescued from the Boko Haram militants, including dozens who are pregnant and other females among them may now face stigma from their communities.

In a telephone interview with Associated Press (AP), the executive director of the UN agency, Prof Babatunde Osotimehin, said that the most important thing is to restore their dignity. He said, “When you have been in captivity against your will and God knows whatever they have done to them. 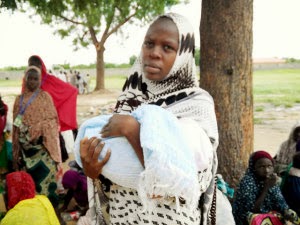