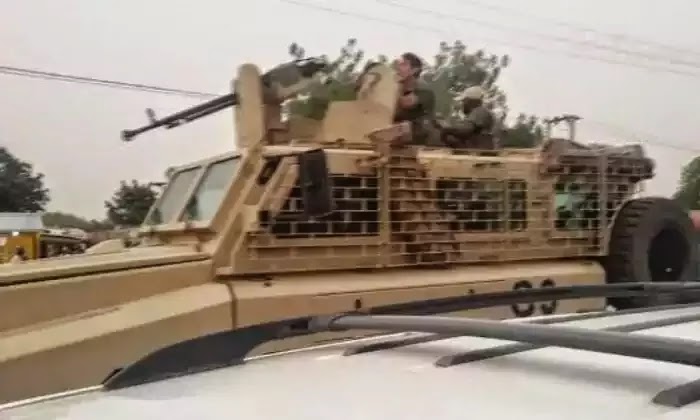 Battle-hardened soldiers, many of them paramilitary leftovers of the apartheid regime, have pursued private wars simply to put bread on the table. Leon Lotz was once a member of the Koevoet – “crowbar” in Afrikaans – a paramilitary police unit created by South Africa’s apartheid regime to root out guerrillas in what is now Namibia.
Thirty years later, something persuaded him to take up arms again in a foreign country. He was killed in March, apparently by friendly fire from a tank in northern Nigeria. Among the most striking facts about Lotz was his age: 59.

A wealth of media reports, witness accounts and photos on social media suggest that he is not the only white mercenary who helped turn the tide against the Islamist militant group Boko Haram in recent weeks, allowing Nigeria to hold a relatively peaceful election. Whether as technical advisers or frontline combatants, some are said to have come from the former Soviet Union but about 300 are reportedly from South Africa and nearing retirement age.

Who are the members of this dad’s army, willing to risk death abroad and prosecution at home to fight someone else’s war? What is their motivation? And are they welcomed by those they are ostensibly helping?
South Africa has a chequered history of exporting soldiers of fortune. Most belong to a generation of soldiers who felt cast aside when the Berlin Wall fell, Nelson Mandela was released and South Africa’s military needs were drastically reduced. Robbed of the only role they were trained for and unable to find alternative work, they felt alienated under a black government and pursued private wars to put bread on the table.

“Very often it’s a money issue – they haven’t done well and they need to make some,” said Jakkie Cilliers, executive director of the Institute for Security Studies in the capital, Pretoria. “It’s not ideological and it’s not the gung-ho image one has from the film Blood Diamond. This is the only skill these guys have. Most of them are in their late 50s or early 60s and trying to make a late bit of income before they’re past it. In five years’ time it won’t be an issue.”

Cilliers recently took part in an Afrikaans radio programme during which three or four mercenaries phoned in. “They said things like: ‘I’m trying to help my kids. My lifestyle is quite crappy. I’m trying to put the grandkids through school.’”

Over the past two decades such private military contractors (to use the respectable term) have gone into battle in Angola, Sierra Leone, Iraq and Afghanistan, and been linked to a failed plot to smuggle Muammar Gaddafi out of Libya.

According to those who have hired or worked alongside them, they are highly professional, skilled and battle-hardened by the South African border wars, in which they often fought alongside black comrades. The popular image of mercenaries as hard-drinking, womanising buccaneers is half a century out of date although, having grown up under white minority rule, they carry some of its baggage.

One source, who did not wish to be named, said: “Are the guys in Nigeria likely to be racist? Yes, they came from the apartheid era and no one has pressed the delete key. But they are very professional guys who get the job done.”

They are mercenaries. The point is they have no business to be there


Several hundred South African mercenaries are still active, according to one estimate, despite the threat of criminal prosecution back home. Nosiviwe Mapisa-Nqakula, the defence minister, has said any deployment to Nigeria would be illegal under laws passed in 1998 and toughened in 2006. “They are mercenaries, whether they are training, skilling the Nigerian defence force, or scouting for them,” she was quoted as saying. “The point is they have no business to be there.”

One man who knew many of them is Simon Mann, an old Etonian former SAS officer who achieved infamy in 2004 with a bungled coup attempt in Equatorial Guinea. “I think they are very effective,” the 62-year-old said. “They certainly know what they’re doing. They’re getting on a bit now but there’s no reason why they can’t have a group of guys beneath them leaping around.”

Mann, the son of a South African mother and British father, co-founded a private military firm that fought on the government sides against rebels in Angola and Sierra Leone in the 1990s. At its peak, Executive Outcomes employed about 1,500 South African mercenaries, some of whom are alleged to be in Nigeria today.

Mann recalled: “We had a large number of South African National Defence Force (SANDF) people being told that, because the African National Congress was coming to power, it was being dismantled. Some were literally being told: ‘Your pension is being torn up.’ They were pissed off and looking for work. We had something like three interested for every place we had: we were inundated.”

Mann estimates that although four-fifths were black, the officers were white, reprising the hierarchy of the pre-1994 army. “The white solders were very good and thoroughly liked and respected the black troops, but nonetheless they were white Afrikaner South Africans with everything that entails. I wouldn’t imagine it’s changed much. A leopard doesn’t change its spots.”

More than 70 South Africans were involved in the Equatorial Guinea fiasco, among them the pilot Crause Steyl, who had been working for Mann for a decade and earning $10,000 to $15,000 a month. Recalling the mercenaries he flew into war zones, the 50-year-old said: “They never spoke about exactly what they do. They kept to themselves and never walked around bragging about it. They were reserved, low-profile people. I don’t think they were getting paid more than the average British soldier. My understanding is about $400 a day.”

South Africans assisted the controversial US security company Blackwater in Iraq, Steyl added, and were now willing to do dirty work in Nigeria that western powers shirked. “The South African mercenaries are giving Boko Haram a hiding. These guys are in their 50s, but for a pilot or tank driver it doesn’t really matter. There’s going to be no Boko Haram. It boggles the mind that Britain and America promised to help Nigeria but never did.

“But the South African government doesn’t want them to exist. They wish them off the planet. When they come back from Nigeria, it will try to prosecute them and put them in jail. Because the colour of these men is white, it makes laws that stop them earning money off shore. How wrong can you be? There is now reverse racism and it’s difficult for white people to get a job.”

A recurring theme is a sense of grievance and resentment among ex-soldiers who perceive today’s South Africa as loaded against them, even though statistics consistently show that the white minority still enjoys disproportionate access to education, jobs and wealth.

Tom Wolmarans, an apartheid-era policeman, said: “There’s no work for white people in South Africa. Are they going up for money? Yes, it has a role to play because they must make a living. That’s all they can do; they are trained to do it. Some of them were laid off to early retirement. People with a hell of a lot of experience. Good soldiers.”

These guys are in their 50s, but for a pilot or tank driver it doesn't really matter


Wolmarans, now a ballistics expert who testified at the murder trial of Oscar Pistorius last year, said he knew two men who had gone to Nigeria to provide military training. “They are good guys, brilliant soldiers, and they do good work up there. If you look at what’s happening with Boko Haram, it’s because of the influence of good soldiers who are training people to do their job. They get results.”

South Africans retain some unique selling points to African governments, according to Helmoed Heitman, local correspondent of Jane’s Defence Weekly. They were more used to being in a scrap than American or European forces, who often came with “gold-plated” equipment, he suggested, and white South Africans were often more at ease fighting alongside black comrades than European troops would be.

“Most of the guys I know were not particularly racist or fighting for white minority rule,” he said. “They have no problem working with black guys and don’t have a racial hangup. Most people in Africa have long since realised this. What they look for is someone with real shooting experience. The old SANDF are not always liked, necessarily, but they are highly regarded.”

And the image of drunk, depressive adventurers was old hat, Heitman argued. “That may have been true of mercenaries in the sixties. The ones I know are pretty serious soldiers and family men. They’re not ones for boozy parties. There are some among them who were having booze and parties in the past but now they’re in their 50s and 60s and serious guys.”

Source:
Guardian Newspaper
Posted by Don Okereke at 9:40:00 am