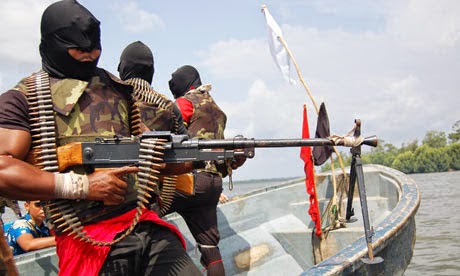 Vanguard reports that the trunklines belong to the Nigerian Petroleum Development Company (NPDC), located on the boundaries of Afiesere and Ekredjebo communities and Otedo and Edjovwe communities both in Ughelli North and Ughelli South Local Government Areas of Delta State.

These petty crumb eaters can only cause pains to the NPDC, Shoreline and the Nigerian National Petroleum Corporation, NNPC, in a promised sham settlement to the lingering crises to these companies and government agencies.

In believing the empty promises of these evil doers and traitors, you continue to slowly drive your NPDC, NNPC and Shoreline into a certain abyss you will never recover from and we the Urhobo nation will continue to demand for our fair share of the pipeline surveillance contract jobs for the sake of equity and justice.

We, Urhobo Gbagbako, a militia group of all ex-militants, youths, women and elders of Urhobo ethnic nationality, did not and have not given any individual or group, authority to speak on our behalf on any issue as it concerns the pipeline surveillance contract job.

President General of Afiesere community, Emmanuel Shikaleke, confirmed the incident, stating, “I was called by officials of NPDC, who had earlier come to assess the level of damage on the trunklines by the actions of the boys. For now, there is nothing we can do other than leave the matter for the authorities to handle. As I speak with you, men of the Nigerian Army are at the scene to forestall further attack.”
Posted by Don Okereke at 8:00:00 pm