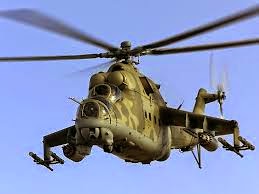 Displaced residents of Monguno, in Borno State, which was recently taken over by Boko Haram, have said they saw helicopters dropping arms and food items for the insurgents in the bushes.


The IDPs, who said they spent about 48 hours in the bush running towards Maiduguri, expressed worry that the Boko Haram sect was not the only ones involved in the insurgency, but that there are many foreign fighters and some external supports.

Leader of the Nigeria Vigilante Group in Monguno, Muhammed Sani,50, said he had, on several occasions, spotted unusual delivery of items in big wooden boxes by air, and sacks being dropped in the bushes around Marte and Monguno where Boko Haram terrorists were camped.

“Even during the attack on Monguno, there was an aircraft that came but did not do anything, not even dropping a single bomb before it left; then another one later came around the Monguno barracks and we saw four men alighting from the aircraft, using a rope. The aircraft left, but we doubt if they were soldiers.

“Even before then, some of my colleagues and I have been sighting helicopters dropping items in sacks and some in boxes to them at the camp of Boko Haram near Chikungudu and Kwalaram villages. Many helicopters came to drop items packed in boxes and sacks to the Boko Haram insurgents at a bush camp between Monguno and Marte; then we would see the Boko Haram gunmen rushing to the spot to pick the dropped items,” he stated.

The displaced vigilante officials said those that attacked Monguno comprised hundreds of foreigners who looked like Chadians.

“Many of them looked like Chadian Arabs – they were light-skinned with coiled hair, and there were many young men from Monguno – who Boko Haram had abducted when Nganzai was attacked last year – that were now active members of the sect.

“While Boko Haram members that are former youths of Monguno were leading other insurgents to attack Monguno town, the foreigners were the ones engaging soldiers near the barracks,” he explained.

Sani, who said he had lived in Monguno for the past 20 years, said he fled amidst the hail of bullets when the terrorists became irritated by his anti-bullet charms that rendered bullets ineffective. His shirt and trousers were riddled by bullets, yet he remained unhurt, he said.