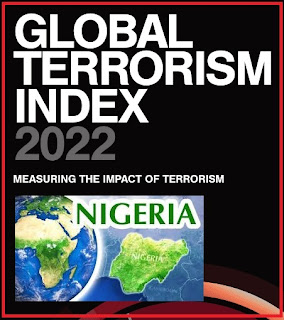 Nigeria has been ranked sixth in the 2022 global terrorism index (GTI), an improvement from the fourth position it was since 2017.

In the GTI, published by the Institute for Economics & Peace (IEP), an independent and non-profit think tank, Nigeria, Syria and Somalia were the only countries among the 10 most impacted by terrorism to record an improvement in score from 2020 to 2021.

The report stated that “terror-related casualties dropped by almost half compared with the previous year.

“However, the number of terrorist attacks increased by 49 per cent between 2020 and 2021. 36 percent of attacks were claimed by ISWAP, Boko Haram being responsible for eight per cent and 44 percent not attributed to any group.”

The report attributed terror attacks in Nigeria from 2020 to ISWAP.

“The decline of Boko Haram continued into 2021, with Boko Haram responsible for only 69 deaths, a decrease of 77 percent from the previous year. This is the lowest number of deaths by the group for a decade,” the report said.

“Boko Haram’s decline has resulted in a substantial improvement in terrorism in Borno State, which experienced a decrease of 71 percent in terrorism deaths when compared with the prior year.

It explained that “attacks in the (Borno) state also decreased from 121 to 86 respectively, a decrease of 30 per cent.”

However, the report said Borno State remains the hardest-hit region in Nigeria for terrorism, accounting for half of all terror-related deaths in 2021.

It noted that Boko Haram’s decline coincides with a number of factors, most significantly the death of the group’s leader, Abubakar Shekau. Shekau, who committed suicide by detonating an explosives vest during a confrontation with ISWAP in May 2021.

“Given the demise of their leader, Shekau’s followers were faced with the decision to either continue Shekau’s ideology or join ISWAP. It has been reported that as many as former Boko Haram commanders have joined ISWAp after Shekau’s death,” the report said.

“Attacks by ISWA as well as counter-terrorism efforts by the Nigerian government and foreign military forces have significantly weakened Boko Haram’s impact in Nigeria.”

The terrorism index also showed that law enforcement, including police and prison officers, overtook both military and civilians as the most targeted group of 2021.

These attacks, the report said, were largely driven by a surge in clashes between law enforcement and separatist groups, such as the Indigenous People of Biafra (IPOB).

“As conflict in the Ukraine dominates global attention it is crucial that the global fight against terrorism is not sidelined. Terrorist activity in the Sahel is increasing substantially, and is driven by Islamic militias,” Killelea said.

“The decline of terrorism in the West coincided with the COVID-19 pandemic. Restrictions on freedom of movement, travel and the immediate threat to personal health may explain some of the fall. Once the emergency measures are removed there is the possibility of an uptick in terrorism activity.”