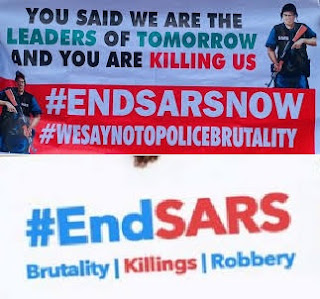 The #EndSARS & #EndPoliceBrutality campaign has continued to dominate public space following atrocities committed by some bad eggs in the Nigeria Police Force. These atrocities, no doubt attained a high level of notoriety in recent times and equally generated a huge public outcry resulting in nationwide protests and condemnations being conferred on the NPF.

The IGP's recent directives especially with banning elite units like FSARS, SARS, STS, IRT etc from "routine patrol and low risk policing duties" is in my opinion not a long term solution to the menace of these bad cops.

I do not subscribe to the 'ban' from the roads as the presence of these elite cops conducting patrols and surveillance duties (which are some of the pillars of the security) aids the detection, deterrence and sometimes delays the occurrence of incidents by criminal elements amongst us.

Their presence in the public space has also aided the response time to mitigate the occurrence of such criminal incidents.

Rather, I am of the firm belief that some of the under-listed suggestions should form a part of the solutions for reforms that must be instituted by the leadership of the Police high command towards evolving the Nigeria Police Force into an attractive, desired, enviable and respected cop of well-trained officers, that the nation deserves.

Below are the said suggestions.

1. A review of the recruitment requirements and processes for admission into the Police training schools should be urgently implemented.

2. Equally, the training curriculum especially for the training of recruits, needs to be reviewed to align with societal demands of contemporary times. It is worthy to note that my interactions with officers who attended the Police Academy, Kano have remained largely impressive because of the quality of training, received as by these officers in their cadet days.

3. A compulsory and structured retraining program is required to re-orientate serving policemen at all cadres and also to equip them with the proper etiquette required for dealing with members of the public, along with the right set of knowledge  + skills that will aid them to discharge their duties professionally and in line with modern policing tenets. To achieve this, the various existing training institutions for specialized capacity building programs and their modules have to be upgraded to meet with present demands, trends and techniques required for effective crime bursting duties. In addition, weapon handling skills should be horned along with officers embarking on periodic visits to the shooting range. This, if executed is expected to improve marksmanship, promote weapon handling discipline and skills which will reduce the menace of 'accidental discharge'.

4. Also needed to be implemented, is an effective supervision mechanism which will include a periodic test for substance use and the psychological evaluation of officers to identify and discipline bad eggs that are not compliant with disciplinary measures to promote modern policing attitudes. Acts of indiscipline by officers is largely responsible for the battered image, the police presently have. Any policeman whose conduct attracts a collateral reputation damage for the force as a result of indiscipline should be severely sanctioned, so that discipline can restored.

5. The reward system of the police needs to be rejigged and should be based on merit, bravery, courage and other exemplary behavioral values, instead of using other primordial parameters that dampen the morale of officers, who are forced to resort to unorthodox means for promotion and survival purposes. In addition,  the police high command should also focus on aspects of the conditions of service, such as providing decent accommodation, clean offices, stations with the needed equipment for use by officers, the availability of mandatory capacity building programs for all Officers, an improved welfare package with financial and other benefits for serving and retired police personnel, so as to attract more of the right persons into the police force. Also, important for consideration is a transparent pension and insurance scheme for implementation.

6. The appearance of the average policeman is nothing to write home about. Efforts should be focused on adequately kitting our policemen with the right uniforms, tools and equipment as seen in other climes. No doubt, if properly kitted, our policemen will not only exude confidence but also attract the same level of confidence and goodwill from the various publics.

7. To perform optimally and to also give the police force a superior fire power, the right set of equipment must be provided. These should include a wide range of required soft and hardware. Also needed is a functional central database that is linked with other institutions in the criminal justice system and the financial sectors, forensic laboratories for effective investigations, surveillance drones, Armoured Personnel Carriers,K9, appropriate helmets, bullet proof vests, rehabilitated barracks and community focused initiatives that will promote the shift from traditional policing to community policing, where all elements of the communities will be involved with the police in the search for solutions to challenges of crime and disorder.

The aforementioned suggestions are hinged on my sincere belief that if the Police high command implements these suggestions along with other actionable considerations. As a nation, we will in no time have a transformed Police force that we will not only be proud of, but will equally have no place for impediments to a successful policing process for the benefit of all.

Hi! This is kind of off topic but I need some guidance from an established blog. Is it very hard to set up your own blog? I’m not very
technical but I can figure things out pretty fast. I’m thinking about making my own but I’m not sure where to start.
Do you have any ideas or suggestions? Thanks