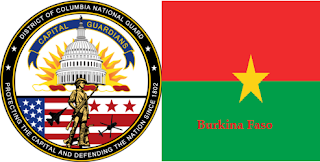 The District of Columbia National Guard and the National Armed Forces of Burkina Faso signed a partnership agreement on 1 February. This initiative occurs under the Department of Defense’s State Partnership Program (SPP) which brings together different National Guards with U.S. partners around the world. The deal occurs at a critical moment as violence in Burkina Faso continues.


State Partnerships
“The SPP evolved from a 1991 U.S. European Command decision to set up the Joint Contact Team Program in the Baltic Region with Reserve component Soldiers and Airmen,” the National Guard’s website explains.  It is aimed at providing “an equally beneficial relationship between armed forces of partnering U.S. National Guard states and foreign nations.”

According to a 4 February press release by the U.S. Army, Burkina Faso is the 76th nation to join this program, while the DC Guard now has partnerships with two nations, the Caribbean island of Jamaica, and the aforementioned African nation.

The U.S. Army’s press release added that the DC Guard-Burkina Faso partnership will cover area such as: “homeland defense and security, disaster mitigation and response, consequence and crisis management, inter-agency cooperation, border, port, and aviation security, fellowship-style internships, and combat medical events.” The first initiative between the two sides will be a trip by DC Guard soldiers and airmen who will participate in Exercise Flintlock, which is directed by Chairman of the Joint Chiefs of Staff (CJCS) and sponsored by U.S. Africa Command.

Nowadays there are partnerships between the Guard and U.S. allies around the world. A total of 14 African states have established partnerships with the U.S. National guard; for example Benin teams up North Dakota, Botswana teams up with North Carolina, Djibouti teams up with Kentucky, and  Ghana teams up with North Dakota. According to U.S. Africa Command, “in fiscal year 2018, the National Guard conducted more than 100 State Partnership Program events in support of USAFRICOM’s security cooperation objectives. These events involved more than 3,000 partner nation personnel.”

In addition to the SPP, Burkina Faso is  one of the current countries to partner with the United States under the Trans Saharan Counterterrorism Program.  This program was launched in 2005 by the State Department to expand on the previously operational Pan Sahel Initiative that began shortly after the attacks of 9/11.  The Sahel as a whole has presented unique challenges not only to the United States but also to its partners in the EU as well, the migrant crisis is a prime example of this complex situation. This has led to efforts by the Europeans to get involved with other states in the region such as Mali and Niger to undertake similar endeavors.

The United States has had a history of warm relations with Burkina Faso since they gained independence from France under the name of Upper Volta in 1960. The role of the US during the crucial transitional period during 2014-15 after the overthrow of the Compare Presidency has been regarded as a positive influence by the Burkinbe as a whole when viewing the reliability of the United States as a partner.

The recent spike of insurgent attacks in the region over the last few years has caused great concern over regional stability.  So far efforts to restore democratic ideals in Mali and the focus to support the Government in Niger seems to have created some thought that Burkina Faso was being ignored by AFRICOM and other major decision makers.

This relationship can actually put to rest three key criticisms that have been levied against previous administrations. First that the approach by the United States towards certain partners can be seen as heavy handed. Secondly it also disproves the notion that for the most part the United States is only concerned with access to natural resources as has been seen in other parts of the world and finally this is not a ‘democracy building operation”.

Final Thoughts
The State Partnership with the DC National Guard and growing relations with AFRICOM cannot come too soon as violence in the West African state continues. In January there were a series of attacks attacking the Gold Industry. In these series of incidents foreign nationals were targeted, these incidents appeared to be a omen of future events In mid-February, the AFP reported that a doctor was killed and two police officers were wounded in the northern part of the country when a “ bomb hidden in a corpse dressed in military uniform,” exploded. Prime Minister Paul Kaba Thieba  and other ministers resigned in January, apparently in response to their incapability to violence and kidnappings.

Right now, the government and armed forces Burkina Faso can use all the international aid they can get to bring peace to the landlocked country.

Wilder Alejandro Sanchez is an analyst who focuses on geopolitical, military and cybersecurity issues.

The views expressed in this article are those of the authors alone and do not reflect those of any institutions with which the author are associated.