Nigeria Is 3rd Most Terrorized Country in The World, Says Global Terrorism Index 2018 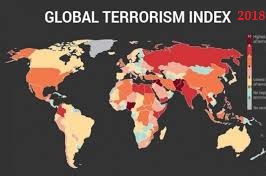 
In the report, which was released, on Wednesday, the index placed Nigeria after war-torn countries like Iraq, Afghanistan and ahead of Syria and Pakistan.

The report also showed that there is a drop in the number of deaths linked to terrorism. The report said, “Total deaths from terrorism in Nigeria fell to 1,532 in 2017, a drop of 16% from the previous year.”

This year’s Global Terrorism Index showed a continuing trend of a decline in terrorism, with deaths from terrorism falling for the third consecutive year, after peaking in 2014.

However, whilst the GTI finds that the global impact from terrorism is on the decline, it also shows that terrorism is still widespread, and even getting worse in some regions.

Nigeria has been battling with Boko Haram terrorists in the northeast for years now.