How The United States Is Retooling Troops in Africa

In recent weeks there have some interesting comments regarding the status of American Forces Operating in Africa. There have been reports of shifting of and in some case removing Special Forces from the Continent to deal with emerging threats from both Russia and China.


It is well known that for certain contingencies there are Two US Marine FAST (Fleet Anti-Terrorism Support Teams) tasked for operations in Africa. Although they are not based in an African Country their mission mandates that they have to provide support within a certain time frame measured in hours not days as it was in the recent past.

What about the US Army? This branch also has a component for service in Africa as well. What is the status of it? Clearly the Army is currently evaluating current strategy and tactics after the ambush of a US Special Forces team in Niger last year that resulted in the deaths of four members of the team. 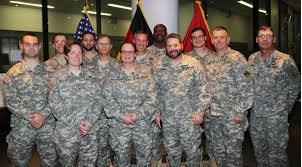 The new commander of US Army Africa Major General Roger Cloutier Jr recently gave an interview to a defense publication where he stated that his major concern was readiness. This is interesting considering the Area of Operations that the command currently has. There are fifty-four nations in Africa. US Army Africa is responsible for all of them with the notable exception being Egypt.

One way to address the readiness challenge is to have an SFAB (Security Force Assistance Brigade) allocated for Africa to protect American Interests. This force which has the mission of training, advising and enabling security forces in host nations to stand up to deal with those internal threats which caused them to seek assistance from the United States.

This could free up the 2nd Brigade Combat Team which is currently tasked as a readiness team for AFRICOM and the Special Forces Components to take on other vital missions.
Although a confidential document it is suspected that the current mission plan for the next four fiscal years will include developing security in Somalia, containing instability in Libya, and supporting partners in both the Sahel and in the Lake Chad basin. It will also “set the theater by aligning forces, authorities, capabilities, footprints and agreements.”

On a daily basis there are 2,000 US members on the continent. That is a relatively small footprint for a major combatant command that is conducting daily operations.

In the future we can expect more drone strikes as a harder look into how and when American Forces are deployed to Africa and even conducting joint operations with local partners. These facts show a command that feels that in the past some key decisions may have been made more in haste than in necessity.

One thing for certain it appears that the Pentagon is saying one thing while Vicenza is saying another thing. Typical Washington double speak  at work.