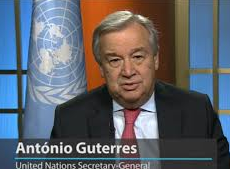 The United Nations Secretary-General, Antonio Guterres has called for concerted efforts to neutralize the security challenges in Nigeria.


He said this in the ‘Report of the Secretary-General on the activities of the United Nations Office for West Africa and the Sahel (UNOWAS)’, presented to the UN Security Council.

Guterres said asymmetrical attacks were carried out by Boko Haram terrorists against security forces, local authorities and civilians in Nigeria and other West African states.

“In Nigeria, multiple clashes between farmers and herders in the Middle Belt states, as well as in the southern states of Edo, Ebonyi and Kogi, resulted in numerous casualties, population displacement and destruction of property,” he said.

Guterres also expressed concerns on the continued protests by the Islamic Movement in Nigeria IMN) Sheikh Zakzaky, over the detention of its leader and militant groups’ threat to resume attacks.

Meanwhile, as the 2019 general election draws near, the UN has stated that there was the need to reactivate the National Peace Committee, which played critical roles in ensuring a peaceful 2015 presidential election.