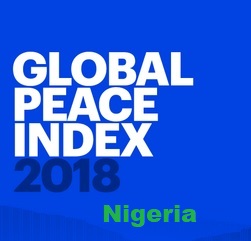 Nigeria has been ranked the 16th least peaceful country in the world, according to the 2018 edition of Global Peace Index, GPI.
The report, released yesterday, ranked Nigeria 148 out of the total 163 countries surveyed. Iceland is the most peaceful country, closely followed by New Zealand and Austria while Syria is ranked least peaceful, coming after Afghanistan and South Sudan respectively.

In Sub-Sahara Africa, Nigeria is ranked 40 out of 44 countries, with Mauritius topping the list, while South Sudan is ranked least.

According to the report produced by the Institute for Economics and Peace, IEP, global level of peace has deteriorated by 0.27 percent in the last year, marking the fourth successive year of deterioration.

It also said the world is “less peaceful today than at any time in the last decade.” It added that 92 countries deteriorated, while only 71 improved. Nigeria is one of such countries, up one place from its 2017 ranking of 149.

The report covers 99.7 percent of the world’s population and uses 23 qualitative and quantitative indicators from “highly respected sources” to compile the index. These indicators are grouped into three key domains: ‘ongoing conflict’, ‘safety and security’, and ‘militarisation.’

Culled From: Vanguard
Posted by Don Okereke at 3:16:00 pm