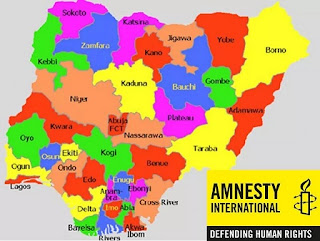 Global human rights group Amnesty International has accused the Nigerian Government of encouraging the impunity fueling the increasing insecurity in the country by failing to hold murderers to account.


The group said in a statement on Thursday that independently verified figures indicate that at least 1,813 persons have been murdered across 17 states, which is double the 894 people killed in the entire 2017.

They explained that the killings are usually the result of the farmers-herders conflict and Boko Haram attacks, as well as armed banditry among others.

“We are gravely concerned about the rising spate of killings across the country, especially the communal clashes between farmers and herders and attacks by bandits across at least 17 states,” said Osai Ojigho, Director Amnesty International Nigeria.

She added, “The authorities have a responsibility to protect lives and properties, but they are clearly not doing enough going by what is happening.

“The latest incidence in Plateau State, where armed gunmen attacked 11 villages on June 23 for at least seven hours and killed at least 200 villagers without intervention from security forces should be investigated.”

But the government and the military have yet to respond to the allegations.

The Amnesty International director in the country further blamed the violence in Plateau, which began after an attack said to be followed by a reprisal from Thursday last week, on unacceptable security lapses.

She noted that despite the deployment of security forces, including the military in over 30 states, the escalation of the attacks has proven that whatever the authorities were doing was not working.

Ojigho also stressed the urgent need for people who are suspected of committing crimes across the country to be held accountable.

She, however, said, “We hope that President Buhari’s commitment to bringing those suspected to be criminally responsible for the killings in Plateau State to justice will break the impunity that has spread through the country.”

“In addition, government must answer these questions: who are these attackers, where do they come from, where do they go after attacks, who arm them, why is security forces’ response time very slow?”

The director revealed that Amnesty International has begun an investigation into the rising insecurity that has resulted in the increase in killings across Nigeria.

According to her, investigations conducted show worrying details of how frequently the security forces failed to protect villagers.

Ojigho decried that in all cases investigated by Amnesty International, the attackers usually arrive in their hundreds, spend hours killing people and setting houses on fire, and then disappear without a trace.

She lamented that the killings would have an impact on the nation’s food security, especially at the peak of the farming season as communities affected by the violence are largely agrarian.

The Amnesty International director challenged the Nigerian authorities to address the security lapses that make it easier for the killers to carry out attacks and disappear.

“Making arrests and bringing to justice those suspected to be responsible for these attacks is crucial in ending the killings that are gradually turning into almost a daily occurrence.

“In many instances, these killings happen and no arrests take place,” Ojigho claimed.

The government and military authorities have rejected previous reports by Amnesty International accusing soldiers of torture and sexual harassment of citizens in the North East.