Catholics Across Nigeria Protest Against Blooodletting 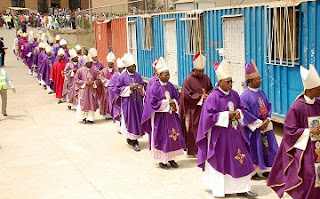 The Catholic faithful across Nigeria are embarking on peaceful protest over continued killings in the country today.


The protest which holds simultaneously in all states and dioceses in Nigeria is not for Catholics alone but other Christian denominations.

This will be the first time the Church known for its perceived conservative disposition unlike other churches is embarking on a protest as the Church always take the dialogue approach to issues.

The protest apart from being in response to the continued killings, particularly that of Christian minorities in the north, is in solidarity with the Catholic Diocese of Makurdi which today buries two priests and 17 Parishioners killed recently by armed Fulani herdsmen.

Representative of Pope Francis to Nigeria (Papal Nuncio), Archbishop Antonio Guido is leading 50 Catholic Bishops to the mass burial of the two priests and the parishioners at the Se Suu Maria Pilgrimage Centre, Igbor, Benue State.

Director of Communications, Catholic Diocese of Makurdi, Rev. Father Moses Iorapuu who disclosed this to newsmen said the date of the funeral which was chosen during the bishops’ conference in Rome coincided with the date the anti-open grazing law was passed by the Benue State House of Assembly.

“The local church here (Benue) was under attack as the bishops were in a conference in Rome; so the Pope got primary information.

“It was there the decision was taken with the local church and they fixed the burial for May 22. All the bishops agreed, the divine coincidence of this is that it was May 22, 2017 that the anti-open grazing bill was passed by the state assembly.

“Exactly after one year, this is what we have to show; the priests and many others who were killed. The bishops will be here in their numbers but what they have done is to be sure that the burial has wider coverage and wider participation,” Iorapuu said.

“Some bishops will be leading ceremonies, others will be coming. The Pope’s representative in Nigeria will be present. The Abuja Archbishop, John Cardinal Onaiyekan, has also arranged that there should be a well-organised procession in Abuja,” he added.

Meanwhile, John Cardinal Onaiyekan, Archbishop of the Catholic Archdiocese of Abuja has convened a peace protest with the theme: “peaceful march and prayer for Nigeria.”

Onaiyekan in a statement he personally signed said, “because of the barbaric killing of human beings in Nigeria, and erosion of the perception of life as sacred and in union with the Diocese of Makurdi, we want to express our deepest displeasure over the ugly happenings in our country and pray for the nation.”

According to the statement, the protest commences at 10am and starts from National Christian (Ecumenical) Centre and ends at Our Lady, Queen of Nigeria Pro-Cathedral, Garki with Rosary procession, Mass, address to local and international media and benediction.

“Priests will all be in Cassock, others will come in their Parish or group uniforms or black attire. Please wear shoes or sandals. Priests should also take note that white is the colour of vestment for mass.

“We invite others who are not of the Catholic Faith to also join us. Let us make it a joint project. We must all peacefully fight for a better Nigeria.

“Trouble makers should please keep-off. I want this March and prayer to be peaceful from the beginning to the end and to send a powerful message to the Government of our country and the rest of the world for positive change,” the Archbishop stated.

Culled from: Business Day Newspaper
Posted by Don Okereke at 9:38:00 am