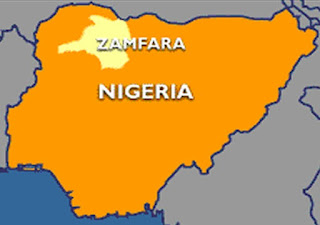 An attack in Zurmi Local Government Area of Zamfara State on Wednesday has left at least 40 people dead. Eyewitness, Bello Mohammed, told DAILY INDEPENDENT that about 5:00p.m, gunmen ambushed a truck conveying passengers and opened fire on them.


According to him, the bandits besieged the market at Birane village and started shooting sporadically at innocent people who were busy doing their business.

He further stated that the attack was not unconnected with the killing by security operatives of some bandits two weeks ago in the area.

The bandits had promised to retaliate.

He said security operatives comprising mobile police and the military had been deployed to the area for the protection of lives and property.

When contacted, Police Spokesman, DSP Muhammad Shehu, confirmed the incident, but claimed that it occurred as a result of an attack on the bandits by local hunters of the area who tried to stop the bandits from their intention of attacking the communities.

“When the community received a message by the bandits that they will soon attack them, no one informed security agencies but, unfortunately, the local hunters went to their hideout inside a nearby bush and confronted the bandits.

“I can authoritatively confirm that many local hunters died and majority of those who survived sustained serious injuries as a result of the encounter,” Shehu said.

He added that the command was yet to ascertain the exact number of those who lost their lives.

Since November 2016 there have been series of attacks by gunmen on villages in the state.

Witnesses in the area said the gunmen, numbering over 70, rode into the mining site at around 3p.m and shot anyone on sight, killing over 40 persons and injuring several others.

Another 40 people were kidnapped by gunmen in Maru Local Government Area of the state a day later, followed by the killing of at least 25 people in three communities the next day.