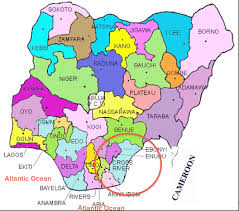 
The gendarmes, according to sources, claimed that they were fighting Cameroon militants who took refuge in the community.

There are well over 5,000 Cameroonian refugees seeking asylum in Danare 1 and 2 communities following the unrest in the southern part of Cameroon.

The PUNCH learnt that gendarmes from Cameroon had also, in December, abducted five persons from Danare on the claims that they were suspected youths involved in the fight for the creation of Ambazonia.

A group of Danare indigenes, led by a former councillor in the Boki LGA, Mr. Douglas Ogar, who spoke with journalists in Calabar on Tuesday, said the gendarmes stormed their village at about 2am on Monday and started shooting.

A lot of residents, according to him, had to scamper for safety.

He said, “Our people did not sleep on Monday because gendarmes from Cameroon invaded our community claiming to be looking for Ambazonia militants.

“The militants, who have since taken refuge in the surrounding forests, were also shooting and the whole community was in chaos.

“It is important to recall the sad invasion of Danare communities by the Cameroonian soldiers, which first started on January 25 where more than 80 well armed Cameroonian soldiers with various range of military weapons and arms crossed the international boundary in the Danare-Daddi/Danare-Bodam international border openings and abducted five natives.

“By the time they left on Monday morning, they said their mission was to warn residents of Danare communities to be aware of their return to carry out a military raid which, according to them, is intended to cleanse Danare communities of all Ambazonia refugees’ threat to the Cameroon Government.

“We feel disappointed with the way the Nigerian Government has handled this.

“As I speak, we are living in fear. I am sure they have come to take surveillance and they have seen that the community is porous.”

He lamented that the gendarmes had threatened to come back to Danare to execute the proscription of Southern Cameroonians taking asylum in Danare as a result of the ongoing Anbazonia crises, which resulted in the mass influx of refugees.

“This is a calculated offensive from Cameroon military on Nigeria. They have shown outright defiance to supremacy of Nigerian territorial sovereignty and blighted the consequences of crossing the international boundary to carrying out all sort of intimidation and harassment on already alarmed citizens of Danare, with warnings of their further assault,” he said.

When contacted, the Cross River State Security Adviser, Mr. Jude Ngaji said the matter was being handled at the highest level of government in the country.

Ngaji said, “The issue has gone beyond the Police and the Nigerian Army has just deployed a battalion to the area.

“No Nigerian has been killed and as you know, this is an international issue which is being handled at the highest level of government.”