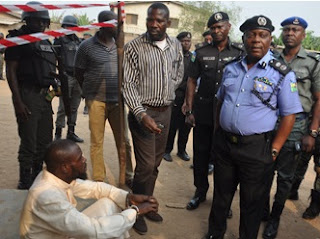 The Lagos State Commissioner of Police, Edgal Imohimi, on Tuesday inaugurated ‘Operation Know Your Neighbour’ to check cultism and drug peddling in the state. He inaugurated the operation during a town hall meeting hosted by Area G Command in Ogba, Lagos.


According to Imohimi, people have taken the act of knowing one’s neighbour for granted, and this is militating against the safety of the society.

He said: “Community policing is based on partnership. It is the people that know how their problem can be solved. I hereby call on everyone that we have decided to launch Operation Know Your Neighbour. We have long taken this act for granted as everyone wants to be on their own. We don’t want to know the person sitting or living beside us.

This is not possible as the next person’s act can easily influence yours. If you see something, say something and don’t keep quiet at your own detriment.”

The commissioner of police said no fewer than 25 persons were in police custody for cult-related crimes and having arms and ammunition in their possession. “Cultists are also members of the society. It is high time all traditional, civil and every other groups that have influence on youths take issues of cultism and awareness seriously.”

Meanwhile, the Lagos State Police Command on Tuesday arrested an Islamic cleric, Alfa Kayode Abdul-Fatai in Alakuko area of the state for being in illegal possession of human parts including a female private organ. The suspect, who was arrested at No. 4, Okedumola Street, Off Obadare area of Alakuko, was caught with female heart and a female lap discovered in his room.

Confirming the arrest, Public Relations Officer of the state police command, SP Chike Oti, said the Islamic cleric was arrested following a tip off and investigation by officers. Oti said the suspect, during interrogation, revealed that the human parts were given to him by an accomplice who has also been rounded up.

He said the Commissioner of Police, Imohimi Edgal, particularly urged members of the public to be conscious of the activities of people living within their vicinity, and report any suspicious movement to law enforcement agencies.

Imohimi subsequently gave out the Citizens Complaint Hot Centre numbers for members of the public to report police unprofessional conduct.