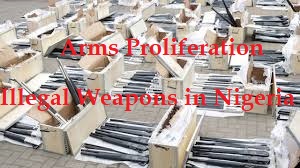 The federal Government of Nigeria has lamented that at least, 350 million illegal weapons are currently in the country.


Minister of Interior, Abdulrahman Dambazau who stated this on Tuesday in Abuja at a meeting on proliferation of small arms and light weapons in Nigeria, said this situation may impact on the 2019 general elections negatively.

While expressing dissatisfaction with proliferation of small arms and light weapons in the country, he stressed that 70 percent of the 500 million of such weapons in West Africa found their ways to Nigeria.

"From records by the United Nations Centre for Peace and Disarmament, I understand that there are approximately 500 million assorted firearms in West Africa.

"And out of these 500 million, 70 per cent, approximating 350 million of them are in Nigeria. And, of course, we know for a fact, that quite a large consignment of weapons are being smuggled, or have been smuggled from North Africa, in particular, Libya, as a consequence of the crisis in that country.
"And, in addition to that, the insurgency in the North East, adds more of the problem.  Because of the supplies of weapons to the insurgents and terrorists there.

"Likewise, we have similar problems in the Niger Delta, where militants are supplied weapons, not only by trade-by-barter with (with stolen oil), but also politicians supply weapons, in order to carry out actions against opponents.

"These are the issues that we hope to deal with, particularly that 2019 elections are coming up.  And, quite a lot of movements of these weapons; people take advantage of that.   So, it is very necessary for us to secure our country", Dambazau said.

Dambazau blamed Nigeria's porous borders for the proliferation of the illegal weapons.

He declared that the Federal Government was determined to end the trend before the 2019 elections.
"Following the meeting we had with Governors two weeks back over the violent conflicts that took place in Benue and other places, between herders and farmers, one of the issues that came up in the communique, was the issue of the proliferation of small arms, and also the issue of drug trafficking and abuse.

"And, we also found that these two issues are triggers to the violence taking place in this country.
"Without the firearms, without the drugs being processed, the courage of those who partake in violence, we would not have the kind of violence with magnitude we have today. So, there is need to take very urgent action, in order to ensure that this situation is dealt with accordingly.

"And, as a follow-up, I invited this meeting of experts so that we will be able to deal with the situation, examine and analyse it, and see how best we can approach it.

Dambazau challenged the Nigeria Immigration Service (NIS), Nigeria Customs Service and other security agencies to ensure that the nation's borders are well manned.

"Our borders are porous. With about 5,000 kilometres porous, there is need for us to look at these issues, because we must secure our country, we must secure our future.
"But, with these weapons and drugs smuggled into this country, if we don't do something now, I am afraid things will be worse than it is now.

"The herders/farmers' conflict, ethno/religious crisis, violent crimes of armed robbery, kidnapping, cultism, militancy, terrorism; all that have something to with weapons and drugs. So, we must deal with this issue."