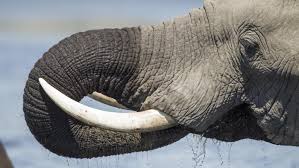 The Nigerian government took a step in enforcing the global ban on illegal ivory trade as it seized dozens of elephant tusks illegally imported into the country.


Every year, hundreds of African elephants and rhinoceros are poached and killed for their tusks in the illegal multi-million dollar trade, with most shipped to Asian and Western countries, which endangers African elephants.

Last week, European and American conservation leaders called on governments worldwide to support African nations to put an end to the trade in elephant ivory.

At the 69th meeting of CITES ( the Convention on International Trade in Endangered Species of Wild Fauna and Flora) in Geneva,  ivory trade was a major topic.

On Wednesday, the Nigeria Customs Service confirmed the seizure of about 55 calibre of elephant tusks along the Nigeria-Cameroon boarder.

Francis Adetoye, the Area Controller in charge of Adamawa and Taraba Commands, made the disclosure at a press briefing in Yola.

Mr. Adetoye said that the success was recorded following a joint anti-smuggling and drugs patrol in collaboration with sister agencies in the state.

“On November 20, the command’s anti-smuggling team successfully seized 55 huge size of elephant tusks being smuggling into Nigeria from a neighbouring country,” he said.

It is not clear if Nigeria was the final destination of the ivory or just a transit point. Mr. Adetoye did not also indicate if the importers were arrested and what will happen to the seized tusks.
The official also spoke on other seizures made by the Customs.

“From January to November, the command recorded 43 seizures with the total Duty Paid Value of N119.77 million naira.

“The seizures include, foreign rice, fairly used vehicles and other used textiles,’’ he said.
He emphasized that the command has given special focus on seizure of rice with the aim of reinforcing federal government’s commitment toward encouraging local production of the commodity.
Culled from: Premium Times
Posted by Don Okereke at 7:59:00 am