Fulani Group Warns That Banning Of Open Grazing, An Invitation To Anarchy 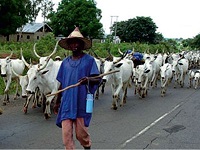 The Secretary-General of Gan Allah Fulani Development Association of Nigeria (GAFDAN), Alhaji Sale Bayeri, has warned that banning of open grazing in Plateau State will create more problems than it intends to resolve, noting that the Fulanis do not know any other method of grazing their cattle, “and any attempt to confine them to a place was a sure invitation to anarchy.”


His warning came on the heels of a protest meeting ofyouths from across the six states of the Middle Belt region yesterday at the Plateau State House of Assembly to deliberate with representatives of the executive and legislative arms of government on the way out of the incessant attacks by Fulani herdsmen in the region.

President of Middle Belt Youth Council, Emma Zopmal, had revealed that the meeting was aimed at compelling governments of the six states in the region to ban open grazing in the entire region, adding that the recent gale of attacks across some local government areas of Plateau State, in which over 50 persons were killed was worrisome.
The states in the region are Kwara, Kogi, Plateau, Benue, Nasarawa and Niger.

But while the communique of the Middle Belt youths’ meeting was still being awaited, the Fulani have forewarned of the consequences of banning open grazing reserve, which they said will spell anarchy in Plateau.

While warning that banning of open grazing should not be contemplated in Plateau State, Bayeri posited that it would be tantamount to banning a people’s way of life.

He said: “Saying that you will ban open grazing on the Plateau is laughable because the average Fulani man does not know any other way of grazing his cows. This is a practice that started right from Adam, and for you to say you want to remove or curb it is an invitation to anarchy really.

“If you want to ban open grazing, you can equally ban open farming because the two agricultural activities go hand in hand and you can’t have one without the other. You can’t eat rice without meat for the soup or stew.”
Bayeri added: “Again, the resistance that will come with such measure is not what Plateau needs at this time. We are passing through turbulent times and we are trying to make peace. So, we should not put in place any measure that will make that peace unattainable.”

Meanwhile, the Plateau State House of Assembly has expressed support for the proposed anti-open grazing bill in the state.

Responding, the Majority Leader of the assembly, Hon. Henry Yenkwap and member representing Shendam constituency, expressed delight that young people are concerned about the security situation in the state, urging them to do a comprehensive petition to state their position clearly and submit same to the assembly.

The Deputy Speaker and member representing the Dengi Constituency, Sale Shehu Yipmong, expressed happiness over the unity and ideas being generated by the youths to address the security challenges in the state. He said the assembly was already thinking in the direction of the bill before the protest visit.

On his part, the Speaker of the assembly, Mr. Peter Azi, reassured that the House was not resting in its oars on the matter

He said the entire assembly was saddened by the unfortunate development and prayed for dialogue, adding that the assembly has visited some of the affected areas to get first hand assessment.
He called on Plateau people to keep political differences aside and face the issue, stressing that government was up and doing about it.

He maintained that the assembly has set up a committee to investigate the circumstances surrounding the massacre at the primary school in Miango.

On the proposal for an anti-open grazing bill for Plateau State, the Speaker challenged the coalition to propose issues that are expected to form parts of the bill, stressing that the bill should not be left to the assembly alone.