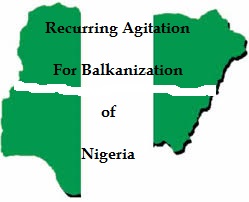 Acting President Yemi Osinbajo is calling for unity in Nigeria amidst separatist calls and mounting ethnic tensions. Nigeria's government is calling for national unity after southerners were given an ultimatum to leave the country's north, triggering renewed calls for independence elsewhere.
Recall that the Arewa Youth Consultative Forum last week said Igbos living in the mainly Muslim north should go back to the largely Christian south by October 1.


At least two other groups in the south and southwest have since revived their push for independence, underlining barely concealed ethnic divisions in Africa's most populous nation.
In the Igbo-dominated southeast, there have been mounting calls for a separate state of Biafra, 50 years after a previous declaration of independence sparked a civil war.

Nigeria's Vice-President Yemi Osinbajo has moved to nip the issue in the bud, warning the government "cannot control violence once it begins".

At a meeting with northern leaders in Abuja on Tuesday evening, he said the "noises of hate, of division" had been "much louder... than perhaps had been the case in the past".

But he said a common front and dialogue was needed to overcome nearly a year of crippling economic recession that has pushed up inflation and worsened unemployment.

"Every form of violence, every form of hate speech, any stone that is thrown in the market place will hit targets that are not intended," Osinbajo said in a speech.

He added: "This is not the time to retreat behind ethnic lines. Moments like this are not for isolating ourselves... it is a time for us to come together, to work together."

Nigeria's more than 180 million people could be forgiven for feeling a sense of deja vu.
A similar situation involving Igbos in the north was a major factor in triggering the civil war that left more than one million dead between 1967 and 1970.

Tensions are also nothing new in a country with more than 250 ethnic groups, which is roughly split along religious lines between north and south.

But there is clear concern because the AYCF represents the dominant ethnic group in the north, the Hausa-speaking Fulani, and was made in the northern city of Kaduna.

Kaduna has been a powder keg of ethnic, sectarian and religious tensions over the years, where rivalries and grievances have regularly boiled over into deadly violence.

Tit-for-tat attacks between nomadic cattle drivers and farmers have also killed thousands in Kaduna state and the wider central region for decades.

What is effectively a resource conflict has frequently been portrayed as a religious or ethnic dispute, because the herders are Muslim and farmers Christian.

The UN's resident co-ordinator in Nigeria, Edward Kallon, has stepped in to the row and publicly called for peaceful co-existence.

But it has not stopped the Niger Delta Self-Determination Movement to call for "political autonomy and 100 percent ownership and control of our resources" in the oil-rich south.

In the Yoruba-dominated southwest, the Oodua Nationalist Coalition said it was time to break free from the "Fulani oligarchy" to create "the third-biggest nation in Africa".

The separatist calls and the need for what one newspaper said was to "clamp down on those beating the drum of war" have dominated headlines in Nigeria over the last week.

To some extent, the situation mirrors 2014, when the then-president Goodluck Jonathan ruled out discussion about Nigeria's continued union at a national conference.

The issue had come to the fore as it was 100 years since British colonialists created Nigeria by amalgamating its linguistically, religiously and socially distinct northern and southern protectorates.
Political commentator Chris Ngwodo told AFP the current situation was cyclical and much of it was "grandstanding, bluff and bluster".

"My sense of the situation is that it is the consequence of a state that doesn't really guarantee social and economic opportunity for the majority of its people," he said.

That has led to a rise of "demagogues and populists" like the Igbo independence leader Nnamdi Kanu, who is testing the government in power with political brinkmanship, he added.

Grievances are frequently expressed in ethnic and religious terms and threats are a way of negotiating, particularly at a time when there is a "leadership vacuum", he said.

Osinbajo is deputising for President Muhammadu Buhari, who has spent much of this year in London receiving treatment for an undisclosed illness.

"There's no great hunger for secession in the north, there really isn't. National solidarity does exist. It might be dysfunctional but it's there," Ngwodo added.