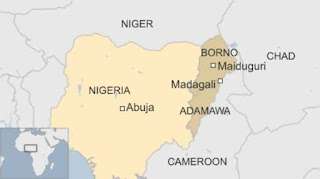 Three suicide bombers who attempted to attack a military outpost in Maiduguri, Borno State, were killed on Wednesday night, an official has said.

The three female teenage suicide bombers attempted to attack a military outpost popularly known as “Gontanamo” along muna garage at about 10:05 p.m.
After being sighted by the troops in their attempt to gain access to the premises, the bombers were shot leading to the explosion of their concealed IED.
The spokesperson of the National Emergency Management Agency, NEMA, in the North-East, Ibrahim Abdulkadir, confirmed that the corpses of suicide bombers were evacuated by emergency officials.
“We have evacuated the corpses of female teenagers. One security personnel who was injured is being treated,” he said.
Suicide bombings, especially by teenage girls, is one of the strategies the Boko Haram uses to attack military and civilian targets. The Boko Haram insurgency has caused the death of about 100,000 people since 2009, according to official figures.