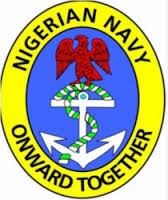 About 47 stowaways were rescued from a merchant ship by the Nigerian Navy in an operation in the Apapa area of Lagos State, Southwest Nigeria.


It was learnt that the persons, who had attempted to leave the country illegally by hiding in merchant ship, were rescued by the NNS Beecroft, Apapa area, after a tip-off on Saturday, December 24.

The stowaways were thereafter handed over to the Lagos State Task Force on Environmental and Special Offences (Enforcement) Unit, Alausa, for prosecution.

The Naval Director of Information, Rear Admiral, Christian Ezekobe, who confirmed the incident on Thursday, said 23 illegal refineries were also destroyed by the naval officers between December 19 and 24.
Ezekobe added that the Chief of Naval Staff, Vice Admiral Ibok-Ete Ibas, had put in place measures to ensure safety in the maritime environment.

He said, “We were able to avert the departure of 47 stowaways, who attempted to leave the country illegally onboard some merchant vessels. That operation was carried out by the NNS Beecroft, Apapa, and the persons have been handed over to the state task force.

“Another patrol team deployed by NNS Delta arrested the captain of a merchant vessel, Solomon Perebo, for his alleged involvement in pipeline vandalism. Also in that week, 23 illegal refinery sites were raided by the base’s patrol teams in the Obodo, Ajosolo, Isaba and Olakpashe creeks in the Warri South-West Local Government Area of Delta State.