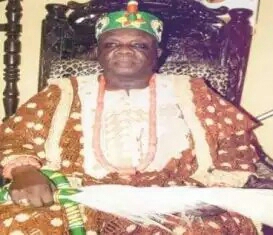 Armed men reportedly abducted a first class traditional ruler in Lagos, Oba Yushau Goriola Oseni, the Oniba of Ibaland, killed his security guard and shot his wife.
The gunmen, suspected to be from Niger Delta, stormed the monarch’s palace at Iba area of Lagos, Southwest Nigeria around 11:30pm on Saturday and took the monarch away, escaping through the waterways.


Palace source said the gunmen killed Oseni’s guard, a Neighbourhood Watch officer and then shot his wife before escaping with the monarch.

When contacted around 00.44am, Police Public Relations Officer, Dolapo Badmus said she was not aware of the kidnap, but that she would confirm and get back to our reporter.

Last week, ex-Lagos State Commissioner for Rural Development, Cornelius Ojelabi had lamented the state of insecurity in Ojo and Badagry area of Lagos and called the attention of the Lagos State Government and the police to swing into action.

Ojelabi, who spoke during a Town Hall meeting in Badagry told Governor Akinwunmi Ambode that his four-year old grandson was kidnapped since January 20, 2016 and that the police had not done anything about the kidnap.
He said insecurity in Ojo and Badagry areas of the state had been frightening as kidnappers were on the prowl.

The former commissioner, who was pained, begged that urgent attention should be given to security threat in Ojo and Badagry axis

Culled from: PM News Nigeria
Posted by Don Okereke at 7:53:00 am