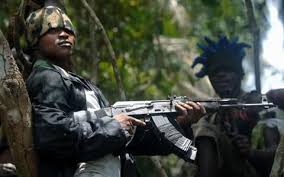 Following recent denial by Chief Government Ekpemupolo aka Tompolo, that he is not associated with the Niger Delta Avengers, the later has issued a stern warning to Tompolo to apologise to it for taking sides with the Nigerian government or face severe consequences. The militants threatened that if Chief Tompolo fails to apologise, it "shall bring the war to your doorstep by blowing up all oil installations within your backyard (Gbaramatu Kingdom)"


Here's the full text of their press release:

RE: I AM NOT PART OF THE NIGER DELTA AVENGERS GROUP – HIGH CHIEF GOVERNMENT EKPEMUPOLO.

It has been brought to our notice of the press release by High Chief Government Ekpemupolo (Tompolo) in page 30 of the Vanguard Newspaper of Tuesday 3rd march 2016 where he wrote “it is imperative to state unequivocally that I do not have link with this new militant group...” he went ahead to “appeal to the serving companies to go about their normal operations, particularly the repair of the Forcados 48-inch pipeline which is very key to the economic stability of our country”.

With due respect Sir. We the Niger Delta Avengers respect you and all former agitators from the region.  We admire your love for the region and all you have done.

As a result, if you can’t join us (Niger Delta Avenger) PLEASE take your hands off our activities because it’s a slap on our face for you to give a nod for repair works to continue on the 48-inch pipeline at Forcados despite a stern warning by us for no one to go near the blast site.

Come to think of it, when the maritime university in Okerenkoko was awarded and approved by the immediate past president only for Buhari led Government to cancel it. When he did so, did any of the Northerner (sic) Elites such as Emirs, former Northerner Vice Presidents, and former Northerner Presidents say a word or question their fellow northerner for doing such an unspeakable harm to the Niger Deltans? So how can Chief Government Ekpemupolo undermined (sic) the Niger Delta avengers and as work to go on the 48-inch pipeline at forcados.

We hereby give you a three days ultimatum to apologize to Niger Delta Avengers in the same national dailies as anything other than that will mean that, we shall bring the war to your doorstep by blowing up all oil installations within your backyard (Gbaramatu Kingdom). Since you have taken side with the Federal government to fight the Niger Delta people.

We are however advising you to stir (sic) clear of our battle with the federal government; it is better you stay mute over our activities if you can’t support us Please take your eyes off our activities.
Posted by Don Okereke at 1:06:00 am