Analysis: Niger Delta Avengers And The Relapse To Militancy in Nigeria’s Niger Delta; Connecting The Dots 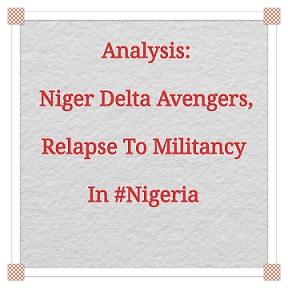 Preamble: This essay aims to critically analyze recent upshots: the relapse to agitation, militancy, bombing of crude oil and gas installations in the Niger Delta. Prevailing realities and information will be juxtaposed to help us reconcile or connect the dots between the remote, immediate causes of this reincarnated Niger Delta agitation and plausible socioeconomic and security implications.


Relapse To Militancy, Hostilities in the Niger Delta

Lending its tacit support, a seemingly resurrected militant group - Niger Delta Liberation Force (NDLF) declared through its spokesman, one Mark Anthony that ‘’the bombing of pipelines in the Niger Delta would continue’’. In view of the fact that Niger Delta Avengers forewarned of their imminent attacks prior to now and successfully carried out those attacks notwithstanding military presence in that vicinity, tells how precarious the situation is and that these chaps mean ‘business’.

New Wave Of Violence in The Niger Delta: Connecting The Dots

Recall that quest for resource control, earlier hostilities – kidnap for ransom and extortion (KRE), bombing of crude oil and gas installations bottomed out aftermath of mouthwatering amnesty largesse – monthly stipends, oversea scholarships, ‘juicy’ pipeline protection contracts (some say it was akin to giving a valuable to a ‘thief’ for safekeeping) which previous administration dangled on repentant Niger Delta militants who traded some of the arms in exchange for the aforementioned.

Yes, throwing money at a problem works for a while but it is tantamount to postponing the evil day. Under the sub-heading - forecasting the future of kidnapping in Nigeria - in his article published 23 October 2015, titled: ‘’Nigeria’s Thriving Kidnapping Enterprise’’, this writer postulated a return of militancy, kidnappings in the Niger Delta. Writer substantiated his assertion in the aforesaid article saying, ‘’the security situation in the Niger Delta is fluid due to the imminent end to the hitherto mouth-watering amnesty largesse, scholarships, and crude oil pipeline protection contracts, amongst others that empowered Niger Delta youths and birthed nouveau-riche dollar billionaires’’. This prognosis agrees with a recent report which cited the kidnapping of 32 seafarers with ransom payments of about $400,000 paid to crime syndicates who specialize in hijacking vessels in the Gulf of Guinea within the second quarter of year 2016.

Also juxtapose current events with overt threats bandied by prominent Niger Delta militants during a meeting at Yenagoa Government House prior to the 2015 presidential elections where they promised war, violence and to take back Niger Delta oil should Mr. Jonathan lose re-election. Do we need a soothsayer to tell us that sanity and tranquility will fizzle out in this region aftermath of weaning these dudes’ mouthwatering contracts, easy money, unfettered access to Aso Rock and a larger-than-life, power-broker, celebrity, private-jet-flying lifestyle? In addition, there are also deep-seated grudges by disgruntled militants who were sidelined from the amnesty largesse. Now it appears these folks are uniting against a common ‘enemy’.

Plausibilities, Security Implications of Renewed Militancy in The Niger Delta

At present, Chevron is said to have shut down operation in its Okan offshore facility leading to loss of 35, 000 barrels per day. Shell Petroleum Development Company of Nigeria Ltd (SPDC) has reportedly evacuated some staff and declared a force majeure on Bonny Light crude exports following a leak possibly caused by an attack on its pipeline. Sequel to successive attacks on oil installations in the Niger Delta, Bloomberg asserts that crude production dipped to below 1.7 million bpd in Nigeria for the first time since 1994, pushing Nigeria’s crude oil output close to a 22 year low hence exerting enormous pressure on Nigeria’s finances and on the 2016 federal budget. Hostilities in the Niger Delta will definitely take a toll on foreign direct investment; no one wants to invest in a clime of uncertainty.

Bearing the hallmark of militancy in the Niger-Delta, four Nigerian Navy personnel were reportedly gunned down in Bayelsa state, South-South Nigeria recently. It was also reported that militants killed three soldiers attached to the Niger Delta Operation Pulo Shield in an ambush in Foropa, Southern Ijaw Local Government Area of Bayelsa State.

With the die cast, multinationals and establishments in the following Niger Delta States – Bayelsa, Delta, Rivers and parts of Ondo state should brace up, take proactive steps against upsurge in violence, kidnappings and destruction of critical infrastructure – Offshore platforms, Tank farms amongst others in the coming weeks, months. If push comes to shove and the insinuated behind-the-scene millions of dollars been dangled by oil majors – Chevron et al to the militants to allow for repair of blasted pipelines are rebuffed, local and expatriate staff of oil firms, vessels within and off the coast of the Niger Delta will be pawns, targets of heightened onslaught.

Open-source intelligence suggests the Niger Delta Avengers are pretty ambitious. If wishes were horses, the militants contrive unveiling a ‘Niger Delta Republic’, their currency, flag and Passport by October, 2016.

What Does The Niger Delta Avengers, Militants Want?

A pick of the terms and conditions for truce listed on the website of the Niger Delta Avengers include:
(a) Immediate implementation of the report of the 2014 National Conference, failure which Nigeria will break-up forcefully.
(b)  That ownership of crude oil blocks must reflect 60% for the oil producing people and 40% for the non-oil producing people. They contend that currently, 80-90% of crude oil blocks are allocated to northerners.
(c)  That the only Nigerian Maritime University situated in the most appropriate and befitting place – Okerenkoko, must start the 2015/2016 academic session immediately.
(d) That Ogoniland and other places polluted by oil in the Niger Delta must be cleaned up and compensation paid to all oil producing communities.
(e)   That the Niger Delta Amnesty programme must be well funded and be allowed to continue and run effectively.
(f)   That the leader of the Indigenous People of Biafra (IPOB), Mr. Nnamdi Kanu, be released unconditionally as instructed by the court.
If the tough-talking stance of president Buhari is anything to go by, it is pretty unlikely the militants can force his hands.

Conclusion
Having demonstrated capacity for havoc, including expertise for blasting a 48 inches export pipeline, the latest threat by the Niger delta Avengers to export their stock-in-trade to Abuja, Lagos, Calabar, Port Harcourt MUST be taken seriously. No gainsaying the fact that dudes are moneyed, certainly not lacking in mettle, they understand the terrain (creeks), are armed with sophisticated weaponry and expertise hence stamping them out will not be a walk in the park. Recall Boko Haram was initially dubbed a ragtag Sect but gave the Nigerian military a run for its money. The Nigerian military and security agencies are currently stretched out and it doesn’t look like they have the capacity to wage asymmetrical warfare simultaneously in different parts of the country? An Igbo proverb suffices: when a tsetse fly roosts on someone’s scrotum, allowing it to remain is a risky and so is trouncing it with a sledge hammer. The Niger Delta imbroglio needs a lot of tact and wisdom. Deterrence, prevention is better than Pyrrhic victory and cheaper than cure.

We earnestly implore the Niger Delta Avengers and latent militant groups to please sheathe their sword, rethink regressing to militancy and bombing critical installations. In addition to the dire economic consequences, their communities bear the brunt of environment degradation ensuant to such activities.