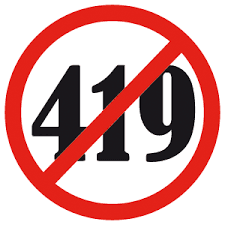 Godwin Nwaofor had a 'suckers list' of target victims to send bogus letters. The letters were sent by a ‘lottery agent’ targeting mainly American pensioners informing them they had won the Australian Lottery.
He received around £1million from the scam and blew the money on luxury cars, gold jewellery and expensive champagne at top nightclubs in London. Nwaofor helped another Nigerian, Frank Onyechonam, who was nicknamed ‘Fizzy’ for his love of vintage champagne and jailed for eight years in 2014. Judge Richard Hone QC had little sympathy for Nwaofor, who broke down in tears at Central Criminal Court as he was jailed for seven years. 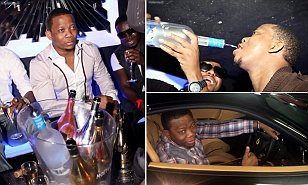 A conman funded a playboy lifestyle by cheating pensioners out of their life savings.

Godwin Nwaofor, 36, kept a 'suckers list' of potential victims to send bogus letters suggesting they had won the Australian Lottery

Nwaofor was a ‘willing and enthusiastic lieutenant’ to the mastermind of the con, another Nigerian, Frank Onyechonam, who was nicknamed ‘Fizzy’ for his love of vintage champagne.

Onyeachonam was jailed eight years last year, after he was exposed as the chief player in the scam.

He drove a Maserati and fired bubbly corks across exclusive private members clubs as he lived a life of fantastic luxury on his victim’s life savings.

The letters were sent by a ‘lottery agent’ targeting mainly American pensioners informing them they had won a life-changing prize and requesting a modest sum to release the funds.

In some cases, dupes set up businesses in an attempt to receive their winnings and became unwitting money mules laundering cash from other victims.

Onyeachonam, of Canning Town, east London, was found guilty of conspiracy to defraud between January 2005 and December 2012. 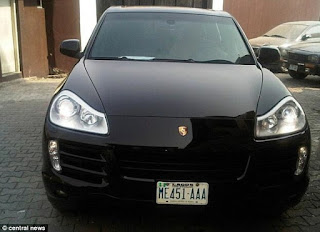 Pictured is a Porsche car he owned

Nwaofor, a father of two, regularly switched addresses to avoid being caught.

One victim, a 76-year-old woman, who believed she had won $1.85m, tried to track down Nwaofor after the FBI told her she had fallen victim to a scam.

She flew to the UK and went to the address she had for Nwaofor, but found that he had already moved on to another address.

Judge Richard Hone QC said the evidence in the case, at Central Criminal Court, against Nwaofor was ‘overwhelming’ and showed him to be a proven liar.

‘You have a tendency to be dishonest in your dealings with landlords, agencies, the police, HMRC, and car hire firms’, he said.

‘You also moved addresses regularly to ensure your whereabouts remained a mystery.’

Police identified 406 victims from two notebooks found at Onyeachonam’s Canary Wharf penthouse when he was arrested.

They seized Louis Vuitton shoes, Gucci handbags, a collection of expensive watches and dozens of designer shoes, as well as 5,000 pictures of Onyeachonam flaunting his wealth at exclusive upmarket venues including the Guvnor Bar in Docklands, east London.

One picture shows him showering a friend with champagne, in others he poses with scantily clad blondes or waves wads of £50 notes.

Onyeachonam was jailed eight years last year, after he was exposed as the chief player in the scam. Pictured is champagne found at his home

There was also evidence of extensive communication with Lagos resident Ese Orogun, nicknamed the ‘chairman’, who is thought to be the global mastermind of the fraud.

He lives in a private gated community, is a ‘celebrity’ in the Nigerian capital and drives multiple supercars, including a Maserati and a Porsche.

Detectives fear the scale of the fraud could even mushroom to £30million if all the details discovered in notebooks and emails can be traced to victims.

Nwaofor moved to the UK in January 2006 from Nigeria and soon married a German citizen.

He has two children with her, aged six and six-months-old.

He broke down in tears as he was jailed for seven years this morning, but the judge said he did not believe the remorse was genuine.

‘Just as a crocodile sheds its tears while devouring its prey, so the copious weeping in court is not hypocritical remorse but tears of frustration that in spite of your careful concealment, you have been well and truly rumbled’, the judge told him.

‘This Australian lottery scam has brought penury and debt to your victims who were ruthlessly milked of their hard earned savings.’ 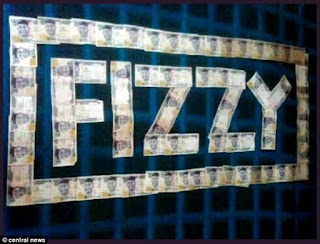 The judge said although ten victims were traced by prosecutors as having fallen for Nwaofor’s scam, but that was probably the ‘tip of the iceberg’.

‘It shows you made the best part of £1m yourself.’

He will serve half his sentence in prison and the remaining part on licence and will also now face confiscation proceeds.

Onyeachonam, of Canning Town, east London, was found guilty of conspiracy to defraud between January 2005 and December 2012.