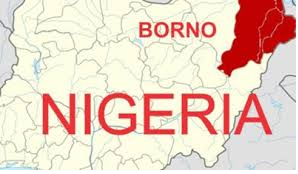 Sequel to its continued offensive against the Boko Haram terrorists, the Nigerian Military has liberated Gudumbali town in Guzamala local government area of Borno. According to a statement released on Friday in Abuja by the Acting Director, Army Public Relations, Col. Sani Usman, the attack on the town was carried out by troops of 7 Brigade.
The statement said the troops during the operation entered and cleared the area killing an unspecified number of the terrorists and destroyed their weapons and equipments. It said that the troops are currently doing clearance operations in the general area, and recalled that the Nigerian Air Force (NAF) had on Monday inflicted heavy damage on the terrorist camps.

However, the statement said the Nigerian Military on Friday lost two soldiers to the terrorists in Marte local government area of Borno, while two others were critically injured. “The troops of 5 Brigade Explosive Ordinance Devices (EOD) unit while advancing towards Dikwa, ran into landmines buried by the terrorists between old Marte and Kerenoa junction.

“The bodies of the two gallant soldiers have been evacuated, to the rear, while the other two wounded soldiers have also been evacuated and are receiving treatment at the military hospital,’’ it said. According to the statement, the formation also lost a Mowag Armoured Personnel Carrier (APC) at the same location.

In spite of the loss, the troops were not deterred as they continued their advance, pursuing the terrorists to their enclaves in Sambisa forest, the statement said. “Similarly, it is important to note that troops in the various formations and units in Operation LAFIYA DOLE are in very high spirit and more determined to destroy the terrorists camps and enclaves,’’ it emphasised.

Vanguard Newspaper
Posted by Don Okereke at 6:39:00 am