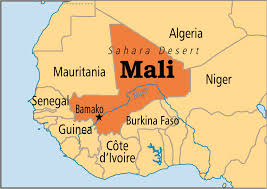 Bamako (AFP) - Several hostages, including a number of foreigners, were caught in a standoff in central Mali Friday after gunmen stormed a hotel during a shootout with soldiers in which at least five troops and two attackers were killed, the government said.


A Ukrainian hostage managed to escape from the "four or five terrorists" who were still barricaded inside the hotel in Sevare, telling soldiers that he had been with three South Africans and a Russian when the shooting began.

"At around 7 am (0700 GMT), a terrorist attack was carried out at the Byblos hotel in Sevare, where a part of the (UN mission) MINUSMA staff is staying," the government said in a statement sent to AFP Friday evening, in the first official comment on the attack.

The statement gave a provisional toll of "five dead, two injured" on the Malian army side and "two killed" on the insurgent side. Seven suspects had been detained, it added.

A military source had earlier said at least eight people had been killed with "three bodies lying in front of the hotel next to a burned-out minibus."

One of the attackers was wearing an explosives belt, the source added.
MINUSMA said "a member of MINUSMA"s associate international staff" was killed in the "terrorist attack", without giving the victim's nationality.

The UN mission said the initial target of the attack was a Malian military site.
"The attackers, who were repulsed by the Malian forces, then holed up in a hotel.
"The clashes between the attackers and Malian security forces continued throughout the morning and sporadic fire continues at the hotel and in the neighbourhood," MINUSMA added.
The UN mission said it had sent a Malian rapid response team from the capital Bamako -- 620 kilometres to the south (385 miles) -- and also "reinforced the security of Sevare-Mopti airport".

Is is unclear who the foreigners being held are, though the governments of Russia and Ukraine confirmed earlier they each had a national among the hostages.
A spokesman for the Russian embassy in Mali told RIA Novosti state news agency that the Russian hostage was an employee of UTAir, an aviation company which works with the UN mission MINUSMA.
The diplomat said it was unclear whether the hostages were being held at gunpoint or if the attackers were merely "sheltering there".

French President Francois Hollande said French citizens could also "possibly" be caught up in the attack, while South Africa said it was "aware of the situation".
The hotel is popular with both foreign visitors and troops.
No one has claimed responsibility for the attack, which comes as Mali battles a resurgence in jihadist violence, two years after a French-led offensive routed three Islamist factions from most parts of the country.
Situated only a few kilometres from the regional capital Mopti, Sevare is a key staging post on the road to Mali's desert north which fell to extremists in 2012.

- Town 'in lockdown' -
"This hostage-taking is part of the terrorist strategy that Mali and the international community are mobilised against," Malian Communications Minister Choguel Kokalla Maiga told France 24 television.

"The army has completely sealed off the area and the town is in lockdown. They have asked people to stay at home," a local official told AFP, speaking on condition of anonymity.
Sporadic shooting was still heard around the hotel at around 1500 GMT.

Speaking as he welcomed home a Frenchwoman held hostage for nearly six months in Yemen, Hollande said that "in Mali an operation is underway which could possibly involve French nationals" and called on French citizens in danger zones to take "the greatest precautions".

France has over 1,000 soldiers in northern Mali as part of an regional anti-terrorist operation.
MINUSMA said it was liaising with the French forces about the response to the Sevare attack.
It was the third assault in just a week in Mali, which is still struggling to restore stability despite a landmark peace deal agreed in June to end years of unrest and ethnic divisions.

A number of foreigners have been kidnapped by Islamist militants in Mali in recent years, at least two of whom are still being held hostage by Al-Qaeda's front group in the region AQIM.

AQIM and two allied Islamist groups seized control of Mali's north in 2012 before being ousted by French and Malian forces in January 2013.

The insurgents have continued to mount sporadic attacks from their bases in the desert, mainly in the north.
But the attacks have spread since the beginning of the year to the centre of the country and in June to the south near the borders with Ivory Coast and Burkina Faso.