Don’t Just Wait For Change To Happen, Be the Change You Want!!! 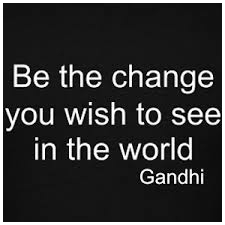 Who said our voices cannot be heard and that we cannot make a real difference, no matter how small it is on our clime or the world. I don’t know if it was a coincidence? While I am not basking on it, I am somewhat elated that barely 24 hours after I published my article: ‘’Boko Haram: Advocating A Better Deal for Internally Displaced Persons (IDPs), Victims of Insurgency, Terrorism in Nigeria’’, and equally tweeted the article to President Buhari (@NGRPresident), Vice President Osinbajo (@ProfOsinbajo) and very notable individuals within and outside Nigeria and disseminated the article on Social Media, President Buhari ordered the immediate release of N5 billion to victims of insurgency and terrorism in Nigeria.


The Chairman of the Committee on Victim Support Fund (CVSF), Lt. Gen. T.Y Danjuma (Rtd) also clarified that ‘’out of the N55.92 billion pledged at the fund-raising dinner for the Victim Support Fund (VSF) in August 2014, N33.54 billion was still outstanding, including N5 Billion from the Federal Government and that the Victim Support Fund (VSF) currently has N23.33 billion in four bank accounts’’. ‘’Mr. Danjuma went further to aver that former president Goodluck Jonathan gave approval for the funds to be incorporated into a Trust Fund, to “insulate it from political interference”.

Many thanks to the inventors of the internet and Social Media; yes, from our little corner and meager resources, we all can advocate for any Cause we are PASSIONATE about; that affects us, people around us or the world at large. Let’s contribute our little quota and together we can make the world a better place. Our lives must transcend what we acquire or take in but what we CONTRIBUTE. Posterity will remember, be fair to us as individuals and our generation by virtue of our positive CONTRIBUTIONS in the service of humanity not for what we appropriated to ourselves.

Sequel to this I humbly put forward a clarion call, advocating we put aside our tribal and religious proclivities and be guided by the TRUTH (which they say is constant), JUSTICE and FAIRNESS in our dealings. It is also very important that we respectfully and constructively engage our governments, ‘ogas-at-the-top’ and speak truth to power without minding whose ox is gored or whether the person involved is from our tribe or religious denomination.

The import of this: Don’t sit down whining and waiting for CHANGE to happen. Change your attitude. Be a good example. Do something good. Be the change you want!!!

Yours in the Service of Humanity and Country,

Email ThisBlogThis!Share to TwitterShare to FacebookShare to Pinterest
Labels: Advocacy, be the change you want, Change Agent, Change the world, Terrorism and Insurgency in Nigeria, Victim Support Fund