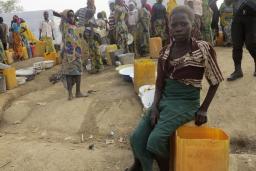 ABUJA (Reuters) - About 12,000 Nigerians are being repatriated over the next three to four days after seeking refuge in Cameroon from attacks by Islamist militant group Boko Haram, Nigeria's state emergency agency said on Wednesday.


A National Emergency Management Agency spokesman said the returnees would be accommodated mainly in the town of Mubi in Adamawa state, close to the border.

"We already cleared about 1,150 people but border officers projected that 12,000 people would be arriving," spokesman Manzo Ezekiel said.

Cameroonian authorities expelled about 2,800 Nigerians over the weekend following a series of suicide bomb attacks in July.

The six-year-old insurgency waged by Boko Haram to establish an Islamist state in the northeast of Nigeria has displaced around 1.5 million people internally and forced thousands to flee into neighboring Cameroon, Niger and Chad.

A multi-national joint task force combining 8,700 troops from Nigeria and its neighbors is being set up in Chad's capital N'Djamena to combat the militants.

A similar-sized repatriation occurred in May from the Lake Chad islands in Niger when Nigerian authorities told residents, many of them Nigerians, to evacuate before military operations.

About 25,000 people were forced to leave, sometimes brutally. Some died en route due to inadequate evacuation assistance.