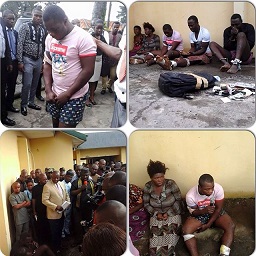 A 28-year-old notorious kidnapper, Henry Chibueze, popularly called ‘Vampire’, has been arrested alongside his informant.


He was said to have been on his way to kidnap tribunal Judges lodged at Disney Hotels, along Onitsha-Owerri Road, when nemesis caught up with him.

Reports say he confessed he had been into the act for a very long time.
“I operate in many parts of Nigeria, Benin Republic and Abidjan where my children and Cameroonian wife resides. My wife thinks I am a business man who buys and sells clothes,” he said.

“I have an informant in the Army who was a Boko Haram member. His name is Hakeem Bello from Kwara State,” Vampire stated.
The suspect also said he had kidnapped so many people in high places and that he sometimes killed his victims if they didn’t succumb to his requests.

“I had a girlfriend in Lagos and I killed her and her entire family because she ran away with my money. I gave her about 45 million naira after I opened a supermarket for her in Aba because I wanted her to fend for herself”, he confessed.

Hakeem, who was said to have absconded from the Nigerian Army, was also caught.
He confirmed that he had fled from the Boko Haram sect and had been covering up Vampire’s acts for a long time with his Army identity card.

Email ThisBlogThis!Share to TwitterShare to FacebookShare to Pinterest
Labels: insecurity in Nigeria, kidnappings in Nigeria, News