Multinational Troops Will Be Allowed To Pursue Boko Haram Across Borders 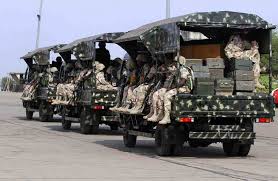 
Garba Shehu told the BBC this was there was now trust between those contributing troops since the election of President Muhammadu Buhari in May.
He was speaking ahead of the Nigerian leader's visit to Cameroon.

A boosted force with 8,700 troops from Cameroon, Chad, Niger and Nigeria is to become fully operational next month.

Relations between Nigeria and Cameroon have been fraught for years because of territorial disputes, in particular over the Bakassi peninsula.
The oil-rich region was eventually awarded to Cameroon by an international court.

BBC Nigeria analyst Naziru Mikailu says Mr Buhari is trying to smooth over these diplomatic tensions as he meets President Paul Biya as both nations now face a new enemy threatening their territorial integrity.
On Tuesday, Cameroon announced it would deploy an extra 2,000 troops along its northern border with Nigeria to fight Boko Haram.
It follows an upsurge in suicide attacks in northern Cameroon blamed on the Nigerian militants.

With the help of troops from Chad and Niger, earlier this year the Nigerian army managed to retake most of the areas taken over by the militants in north-eastern Nigeria.
Although the militants have lost their strongholds, they are still active and there has been an upsurge in suicide attacks since Mr Buhari took office.

"Boko Haram is in disarray and it is doubtful they have any central command," Mr Shehu told the BBC's Newsday programme.
President Buhari has made the multinational force central to his government's strategy in tackling the insurgency.

The force of soldiers, police and civilian personnel will be based in Chad's capital, N'Djamena, which has also been affected by the violence.
"All the countries agreed this operation will not recognise international boundaries - wherever terrorists are they will be chased to these locations and they will be fought until they are finished," Mr Shehu said.

At least 17,000 people have been killed since Boko Haram launched its insurgency in northern Nigeria 2009, according to Amnesty International.
Source:
BBC
Posted by Don Okereke at 1:43:00 pm