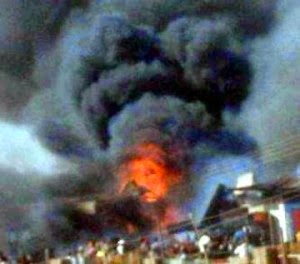 Over 40 people were killed and many injured at Gombe central market following a twin bomb blast in on Thursday evening.

He said the number of dead bodies he saw was about 47 to 50, excluding unknown body parts.
He said security and other aid workers were trying to evacuate the dead and injured persons from the scene of the explosion.

“I can’t say how many were killed or injured but I have seen very many victims dripping with blood, others with parts of their bodies dismembered by the blasts,” Mr. Adamu said.
He claimed the explosions were caused by two suspected female suicide bombers and came after two fighter jets passed over the market.

“The explosions occurred around 5:30 pm at the area where fowls are being sold inside the market, very close to the First Bank branch,” he said.

A member of the Nigeria Red Cross, who pleaded anonymity as they were not officially cleared to speak, told PREMIUM TIMES they counted about 48 dead bodies apart from the pieces. They said the corpses were deposited at the mortuary of the Specialist Hospital and Federal Teaching Hospital, Gombe.

Confirming the incident to journalists, the commissioner of police, Kudu Nma, said there was a bomb blast either from a suicide bomber or improvised explosive device.

According to him, the bomb exploded at the Central Market, Sabon Layi.
“People were busy shopping in preparation for the Sallah festival,” he said.
He added that the casualties were yet to be ascertained.

“As you can see, people are busy working trying to save lives,” he said. “For now we cannot tell you the number (of casualties) because it is contradictory.”

He said police have cordoned off the area to avoid looting. He called on the public to continue maintaining vigilance and alert security officials to suspicious movements.