Sixty-eight members of the Movement for the Actualisation of the Sovereign State of Biafra (MASSOB) have been arrested by the Imo State Police Command for alleged unlawful assembly and procession.

Commissioner of Police, Mr. Austin Evbakhavbokun, who disclosed this to journalists in his office yesterday, said  62 out of the 68 arrested had been charged to court for conspiracy, belonging to unlawful society and conduct likely to cause breach of the peace.
Evbakhavbokun said the self-styled freedom fighters had stormed Owerri, the state capital in buses from all directions to celebrate the Biafra day and remembrance of their fallen heroes without previous notice to the police.

“They were clad in MASSOB/Biafra uniforms with insignia such as Biafra/MASSOB flags, marched towards the Port Harcourt/Owerri federal highways, chanting war songs in such a tumultuous manner as to cause breach of the peace but were later dispersed by the state Police Command,” he added.

The CP, who listed exhibits recovered from the suspects as Biafra uniforms, Biafra ID cards, Biafra flags and some buses, regretted that most of those involved in the act never knew when and how the civil war was fought in the country even as he advised parents and guardians to always keep a tab on the activities of their children and wards to discourage them from acts and conducts capable of jeopardising peace and security in society.

“We have just one country called Nigeria and as such cannot have two flags for the same country and those arrested would be made to face the full weight of the law to serve as a deterrent to others because the law says that any procession without police approval is illegal, null and void and therefore of no effect,” stressing “it is the responsibility of the citizenry to ensure the continued corporate existence of the country, hence such movement as MASSOB cannot be tolerated.” 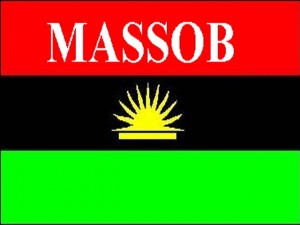