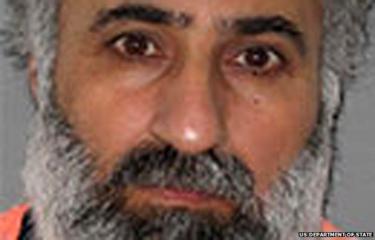 The second-in-command of Islamic State (IS) has been killed in a US-led coalition air strike in northern Iraq, the Iraqi ministry of defence says.

There was no immediate confirmation from the US military or on IS media.
In recent weeks, there were unconfirmed reports that Afari had taken temporary charge of IS operations.
Iraqi sources claimed IS leader Abu Bakr al-Baghdadi had been incapacitated as a result of an air strike in Iraq in March.

'Video'
Gen Ibrahim told the BBC that Afari was killed alongside dozens of militants who he had been meeting at the al-Shuhada (Martyrs) mosque in the village of al-Iyadhiya, near Tal Afar, where he was reportedly a well-known preacher.

Tal Afar, in the northern province of Nineveh, was seized by IS in June 2014.
Media captionIraq's ministry of defence published video purportedly showing the strike that killed Abu Alaa al-Afari

The general did not specify which country had carried out the air strike, but the US has been responsible for the vast majority since the coalition campaign began last August.

The ministry of defence separately published video purportedly showing the strike. It did not say when it took place, but one official told the Associated Press it was on Tuesday.

The Governor of Nineveh, Atheel al-Nujaifi, told the BBC in Washington that his contacts had confirmed Afari's death.

A Pentagon spokeswoman said it had seen the media reports but did not have anything to confirm.
On Wednesday, it announced that it carried out an air strike near Tal Afar in the past day, destroying a "militant fighting position and a heavy machine-gun".

The Iraqi government has previously announced the deaths of IS leaders only for them to resurface alive.
Iraqi interior ministry spokesman Brig Gen Saad Maan Ibrahim, quoted by AP news agency, said although Afari was present at the air strike, his fate was unknown.

But the BBC's Ahmed Maher in Baghdad says that if Afari's death is confirmed, it would represent another blow to IS, which has suffered a series of losses on the battlefield in recent months.

Analysis - Jim Muir, BBC News, Beirut
The man known as Abu Alaa al-Afari is believed to rank number two to IS leader Abu Bakr al-Baghdadi, and commensurately has the highest US bounty on his head ($7m) apart from Baghdadi himself ($10m).
So the Iraqi defence ministry announcement caused a buzz of excitement, only slightly dampened by a statement from the Pentagon, whose jets are presumed to have carried out the strike, saying: "We don't have anything to confirm the reports." 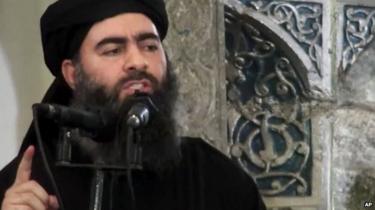 There are conflicting reports about the fate of Abu Bakr al-Baghdadi
The Iraqi authorities continue to insist that Baghdadi himself was incapacitated and had handed operational control to Afari after being badly wounded in an earlier strike - something the Pentagon has denied.
There have been many previous announcements from Baghdad during its long struggle against the Islamist militants which have not been subsequently borne out. So many observers will be sceptical of this latest claim until it is bolstered by independent confirmation.

Last week, the US state departmentoffered a reward of $7m (£4.5m) for information on a "senior IS official" called Abdul Rahman Mustafa al-Qaduli, whom Iraqi security sources identified as Afari.
Born in 1957 or 1959 in Iraq's second city of Mosul, Qaduli joined IS forces in Syria after his release from an Iraqi prison in 2012, it said. He had previously served as the leader of al-Qaeda in Iraq (AQI) - a precursor of IS - in Mosul.

The US added Qaduli to its list of specially designated global terrorists in 2014. 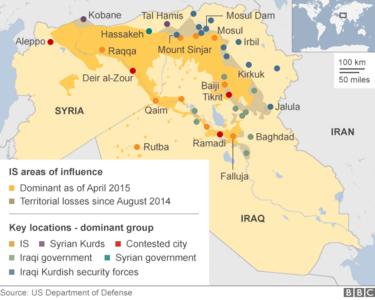