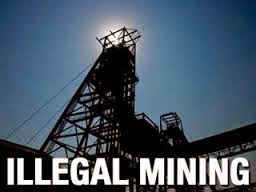 Nigeria Extractive Industries Transparency Initiative (NEITI) has disclosed that Chinese and Indian companies have been involved in illegal mining of Nigeria’s solid mineral deposits across the country.


Chairman of the National Stakeholders Working Group (NSWG) of NEITI, Mr. Ledum Mitee, confirmed at the presentation of the inaugural audit report on Nigeria’s solid mineral sector, which was commissioned and
released weekend in Abuja that several illegal artisanal operations in Nigeria’s solid mineral sector were being sponsored by Chinese and Indian companies but with support from local authorities.

Mitee noted that base-line information gathered from scoping studies that were conducted earlier in the sector, revealed discrepancies in government receipts and operating companies’ payments within the periods.
He expressed regrets that illegal mining has continued to thrive in the sector as a result of an apparent lack of regulation.

He said the illegal miners “engage local artisans and government authorities to do this at ridiculously low rates and export to make extreme profits but NEITI will all the required provide information to enforcement
agencies with which they can use to hunt down such firms in the sector.”

Mitee stated that the Nigerian government got about N54.5 billion from 2007 to 2010 as revenue from
payments made by companies in the forms of royalties, ground rents/annual surface rents, taxation and levies.

According to him, the domination of the solid mineral sector by construction companies and cement manufacturers was unhealthy to a sector that should attract full time investment with capacity to generate good number of employment opportunities.

He explained that the activities of artisanal miners were actually not captured in the audit, considering
their somewhat mode of operation, which proved quite challenging in garnering whatever payments received by the government from them.

“It is NEITI’s firm belief that the time for Nigeria to fully embrace the development of the solid minerals
sector of the extractive industry is now, we successfully undertook a scoping study in the solid minerals sector which confirms that all notable minerals are available in commercial quantity in all states, local government and communities in Nigeria starting from gold, bitumen, diamond, salt, coal, iron ore, limestone, lead and zinc and the country can benefit in revenue from them,” Mitee said.