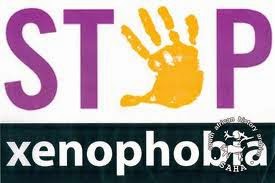 Thousands have marched in South Africa's coastal city of Durban against xenophobia following attacks on foreign nationals in the country. Up to 5,000 people including religious and political leaders attended Thursday's rally after attacks against foreigners left at least five people dead since March.


The atmosphere at the rally was mostly calm, with protesters singing solidarity songs.

"I definitely think that it's about time people stood up for our brothers and sisters because we are Africans,"
Durban resident Avastha Singh told Al Jazeera's Haru Mutasa at the march. "It's so important to show our support because xenophobia should not be tolerated."

Our correspondent tweeted from the rally:
But elsewhere in the city, police fired tear gas and rubber bullets at dozens of protesters who were calling for foreigners with other African origins to leave.

Some South Africans accuse foreigners of taking jobs as the unemployment rate continues to rise.
Speaking in parliament on Thursday President Jacob Zuma called the attacks "shocking" and "unacceptable".

"No amount of frustration or anger can ever justify the attacks on foreign nationals and the looting of their shops. We condemn the violence in the strongest possible terms. The attacks violates all the values that South Africa embodies." Zuma said.

Many of the those affected by xenophobic sentiments in the country have roots in Somalia, Zimbabwe, Mozambique, Malawi, and Nigeria.

The refugee camps, set up on sports fields around the city, will not be large enough if attacks on immigrants continue, said Imtiaz Sooliman of the Gift of the Givers organisation.
In Johannesburg, South Africa's commercial capital, tension is also running high with stores closed in some neighbourhoods.

Police fired rubber bullets and tear gas to disperse a crowd of about 200 protesters who were pelting vehicles with stones calling for immigrants to leave on Thursday.

Johannesburg was the epicentre of the 2008 xenophobic attacks that killed more than 60 people.
Messages circulating on social media warned people in Gauteng province and KwaZulu-Natal to be on high alert for possible attacks and to also remain indoors.