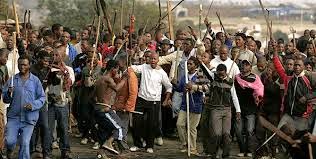 
Chanting and singing, machete-armed residents burned down shops owned by foreigners, including a Nigerian dealership in the nation's largest city.

Immigrants carrying bricks accused police of not doing enough to protect them as businesses smoldered.

Six people killed
Violence targeting immigrant shops started recently in the port city of Durban, where two foreigners and three South Africans were killed. Residents have accused African immigrants of taking their jobs and committing crimes. The unemployment rate in South Africa is 25%, according to government figures.

A sixth death occurred Wednesday. The body of a 58-year-old foreign national was found in Verulam town, where a mob attacked the man at his home. He fled and died of his injuries near his home, South African police said.

At least 112 people have been arrested throughout KwaZulu-Natal Province for various offenses related to the violence, police said.

President Jacob Zuma said his government is addressing social and economic issues brought up by citizens. He said immigrants contribute to the nation's economy while others bring scarce skills.

As the violence spread to other cities, terrified immigrants sought a resolution. Others fled, taking refuge at police stations in major cities.

"They are using this as scapegoats," said Jean-Pierre Lukamba, an immigrant from the Democratic Republic of the Congo.

"Every day, migrants are living in this fire. It's not just attacks. It's institutionalized xenophobia. The government must do something. Those people aren't just mad for no reason. They want electricity, they want jobs, they want water."

'They don't understand the history of Africa'
Lukamba said he's part of an organization trying to negotiate between the two sides.

"They don't understand the history of Africa; if they do, they would know each of us, we are one," he said.
Thousands fled to temporary shelters, with aid group Gift of the Givers saying about 8,500 people are hiding in refugee centers or police stations this week because of the violence. The number did not include those who have moved in with friends or relatives.

The aid group said it has a facility in Johannesburg to help those who might need shelter.
"We are preparing aid packages for those who may journey onwards to their home countries," it said. 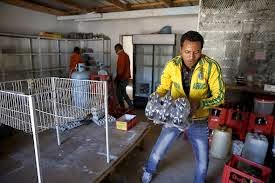 Police ordered to work around the clock
The violence spread from Durban to Johannesburg even though Zuma has condemned the attacks and appealed for calm.

"No amount of frustration or anger can ever justify the attacks on foreign nationals and the looting of their shops," he said. "The attacks violate all the values that South Africa embodies, especially the respect for human life."

Zuma said he has ordered police to work around the clock to protect citizens and immigrants, and arrest the perpetrators.

"We have had no cases of violence at our sites and the situation remains calm," Anderson said in a statement.
In the past, Johannesburg has been the epicenter of anti-immigrant tensions.

In 2008, dozens were killed in attacks in the poorest areas of Johannesburg. Most of the victims were Zimbabweans who had fled repression and dire economic circumstances. In those attacks, police arrested more than 200 people on various charges, including rape, murder, robbery and theft.