Trailer Load of Arms Intercepted By Security Agents in Jos 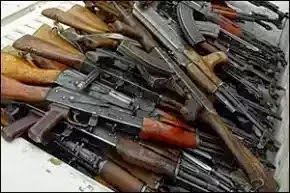 Security officials on Monday intercepted a trailer suspected to be loaded with arms in Jos, Plateau state.


The spokesperson of the Special Taskforce on Jos crisis, STF, Ikedichi Iweha, a captain in the Nigerian Army, confirmed the incident to journalists.

He said the taskforce was aware of the transit of the arms, insisting that the arms were illegal.

PREMIUM TIMES gathered that the arms were transported in a private trailer and was intercepted by a traffic police officer on duty.

According to a witness, the driver of the vehicle transporting the arms refused to be searched by the police. He tried to escape, but had an accident and the trailer broke down at a bridge.

However, the police spokesperson, Abuh Emmanuel, said he would not comment on the matter as he was yet to get details on the incident.

The area where the arm-loaded vehicle broke down according to the STF media officer has been cordoned off by armed soldiers.

The road users plying the route are being subjected to intense search of their vehicles.

Looks like someone is opening up an arms outlet or getting ready for a war.