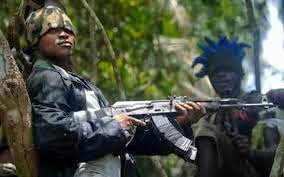 Rivers State Governor, Rotimi Amaechi is sweating over the whereabouts of his aide, Mr. Freddie Ndigbara; who was abducted by unknown gunmen, at an APC rally, in one on the local governments in the state.


Ndigbara, who is an anchorman to Governor Rotimi Amaechi events inside and outside Government House, Port Harcourt, was whisked away on Sunday by hoodlums in Kaani Community, Khana Local Government Area of the state.

It was learnt that Ndigbara, who is popularly called Freddie by Government House workers, was accosted and forced him into a waiting car by the gunmen during a ward rally organised by the All Progressives Congress in the area.

Oblivious of the danger lying ahead of him, the kidnap victim was said to have travelled from Port Harcourt to his home town to be part of the rally.

The hoodlums, according to an eyewitness, had stormed the rally with a red Toyota Highlander sports utility vehicle, made a quick search for their target before forcing him into the car.

It was learnt that the organisers were planning to arrange a canopy at the venue of the rally when the kidnappers struck.

It was reported that Ndigbara’s abductors immediately sped off to an unknown destination, just as members of the party in Kaani, Ward Six took cover to avoid being shot by the suspected kidnappers.

Speaking on the incident, a former Chief Press Secretary to Amaechi, Mr. Blessing Wikina, said a group of gunmen suspected to be thugs working for the Peoples Democratic Party, invaded the rally and took Ndigbara away.

“Yes, Freddie was kidnapped today by a group of men during a rally organised by the APC in Kaani Community Ward Six. The men came in a red Toyota Highlander and took him (Ndigbara) away,” Wikina, who is also an Ogoni indigene, said.

Describing Ndigbara as a gentleman and an easy-going journalist, Wikina condemned his abduction and called on the kidnappers to release him unconditionally.

“The action of those who kidnapped Freddie is condemnable and we call on them to release him unconditionally. Ndigbara is a gentleman that abhors violence,” he stressed.