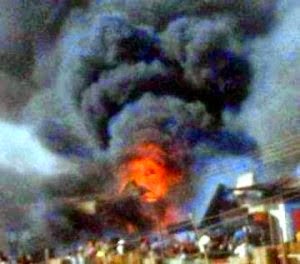 Eleven people were killed in a suicide bomb attack on a military checkpoint near the town of Biu, Borno State in northeast Nigeria on Tuesday, a vigilante and a resident said. Early reports attributed the blast to the handiwork of Boko Haram.


Gana Sheriff, the vigilante, said the attack happened at about 1:00 pm (1200 GMT) at Yamarkumi village, four kilometres (2.5 miles) from Biu in Borno state.

“It was a suicide attack by three men in a motorised tricycle. They killed 11 people, including Civilian JTF (joint task force) and child vendors at the checkpoint,” he said.

The first explosions happened at Yamarkumi along Maiduguri road at about 10pm, and two others followed after 10 minutes with an unknown number of casualties, according to the sane Civilian-JTF source in Biu.

Biu is about 185 kilometers away from Maiduguri.